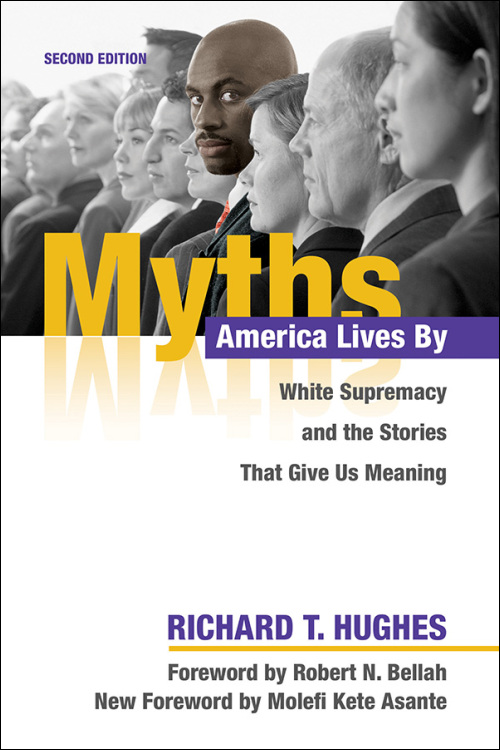 Six myths lie at the heart of the American experience. Taken as aspirational, four of those myths remind us of our noblest ideals, challenging us to realize our nation's promise while galvanizing the sense of hope and unity we need to reach our goals. Misused, these myths allow for illusions of innocence that fly in the face of white supremacy, the primal American myth that stands at the heart of all the others.

Richard T. Hughes is a professor emeritus at both Pepperdine University and Messiah College. He is the author, coauthor, or editor of more than a dozen books including Illusions of Innocence: Protestant Primitivism in America, 1630-1875 and Christian America and the Kingdom of God.

"Fresh and stunning." --The Christian Century

"For those of us who struggle to understand the racially charged polarities of today as well as the highs and lows of our American past, this book paints a heartbreaking, damning, and intimately clear picture." --Christian Chronicle

"Myths America Lives By is an essential read for those interested in shattering the cycle of racism and imaging a new way forward. The book strikes the perfect balance between intellectual knowledge and heartfelt story-telling." --Diverse

"The myth of white supremacy, as Hughes shows, is deeply embedded both in American culture and in American Christianity, which makes its recognition and extermination so crucial." --Intersections

"Prophetic, accessible, illuminating, and full of hard truths that have the potential to change minds and lives, the book deserves a wide audience." --Restoration Quarterly

"The American national story is a myth, built on a series of myths that Richard Hughes reveals in this critical book. Myths America Lives By is a book we all need in order to understand ourselves, to understand our nation, to understand white supremacy."--Ibram X. Kendi, National Book Award-winning author of Stamped from the Beginning: The Definitive History of Racist Ideas in America

"Richard Hughes' Myths America Lives By was already required reading when it was released back in the pre-Trump era. With this update of his lacerating critique of the sordidness of American civil religion and other destructive myths, Hughes now indicts white supremacy as the foundational myth providing the most accelerant to those other myths that have burned through our history. Richard Hughes thinks hard and listens even harder to the historians, the scholars and, most of all, the prophets who understood the malignancy of white supremacy long before he did. The result is Myths America Lives By: White Supremacy and the Stories that Gives Us Meaning. Once again, Hughes' willingness to tell the truth about the myths we live by has put us all in his debt."--Tony Norman, columnist, Pittsburgh Post-Gazette

"I have been under the tutelage of Dr. Richard Hughes since I was mentored by him in graduate school. He never ceases to challenge my easy assumptions, invoke history I do not know, and lift my vision to more elevated realms. Agree with him on every matter or not, I am better for having contended with him. How much we need voices such as his today."--Stephen Mansfield, New York Times bestselling author of The Faith of Barack Obama

"It takes a whole lot of courage for white theologians and scholars to speak the truth about race. If we had more white theologians and religion scholars [like Hughes] who would break their silence about white supremacy and face it for what it is, we--together--could make a better world."--James H. Cone, author of The Cross and the Lynching Tree

"Myths America Lives By is prophetic--not merely in the predictive sense, so evident in the first edition, but in the far more consequential sense of prophecy as calling us to repentance and to our better selves. This is a very fine book, offering both a searing critique and a summons to embrace our common humanity."--Randall Balmer, author of Redeemer: The Life of Jimmy Carter

What are the great american myths?