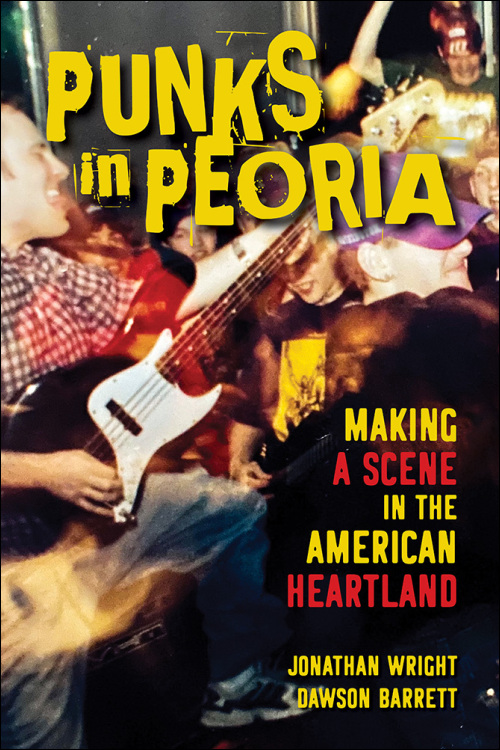 Synonymous with American mediocrity, Peoria was fertile ground for the boredom- and anger-fueled fury of punk rock. Jonathan Wright and Dawson Barrett explore the do-it-yourself scene built by Peoria punks, performers, and scenesters in the 1980s and 1990s. From fanzines to indie record shops to renting the VFW hall for an all-ages show, Peoria's punk culture reflected the movement elsewhere, but the region's conservatism and industrial decline offered a richer-than-usual target environment for rebellion. Eyewitness accounts take readers into hangouts and long-lost venues, while interviews with the people who were there trace the ever-changing scene and varied fortunes of local legends like Caustic Defiance, Dollface, and Planes Mistaken for Stars. What emerges is a sympathetic portrait of a youth culture in search of entertainment but just as hungry for community—the shared sense of otherness that, even for one night only, could unite outsiders and discontents under the banner of music.

A raucous look at a small-city underground, Punks in Peoria takes readers off the beaten track to reveal the punk rock life as lived in Anytown, U.S.A.

Jonathan Wright is a writer, editor, musician, and longtime veteran of the Peoria music scene. He is editor in chief at Peoria Magazines. Dawson Barrett is an associate professor of history at Del Mar College. His books include The Defiant: Protest Movements in Post-Liberal America.

"A well-reported account of the local rise of and changes in punk music, blending overlapping histories with Barrett and Wright’s cultural commentary. " --Bill Knight, The Community Word

"The enlightening, entertaining text blends scholarship with anecdotes; photographs of punk rockers add to the mix.This title will interest punk devotees, or readers interested in the intersection of music and sociology in America from rock and roll’s emergence to the present." --Library Journal

"Written with moshing, stage-diving energy, Punks in Peoria is the warts-and-all music history of a vibrant punk subculture that gave young people hope and life in the decaying American heartland of rural Illinois." --Foreword Reviews

"Punks in Peoria is among the best examples I’ve encountered of a book using scholarly methodologies that’s hugely accessible to any interested reader. Indeed, this text should be seen as a gold standard for academic writers who want to reach the public, with the University of Illinois Press as a key partner in this important work. " --Louder than War

"Well-written and researched, this is a valuable window into both the Peoria musical underground but also into midwestern American life at the end of the twentieth century." --Annals of Iowa

"Punks in Peoria tells a rollicking story of youth culture in a town that is synonymous with conservative middle-American values and tastes. . . . A detailed, entertaining, and at times laugh-out-loud funny view of an aspect of midwestern life long overlooked." --Middle West Review

"Punks in Peoria, with its accompanying compilation disc on Alona's Dream Records, furthers the archaeology of anarchy. . . . Wright and Barrett's text acknowleges that punk did not go into hibernation." --Journal of American Culture

"Punks in Peoria: Making a Scene in the American Heartland is a written history of a people that normally do not have histories written about them: small-town teenage and twenty-something misfits forging a musical and cultural scene despite the societal forces that would rather they did not exist. . . . This book is as close to a primary document as a book of its type could be. . . . Significantly, this book is a monument to how youth can come together through punk music to create a world that they want to belong to from scratch." --Journal of the Illinois State Historical Society

"One of the strongest legacies of the hardcore punk movement in America was its emphasis on the local and the seeding of the country with self-supporting scenes. Every town has a story to tell itself about itself and Punks in Peoria explores this in magnificent detail for the hardcore scene in Peoria, Illinois. While more storied scenes from bigger cities may get the most ink, this book shows how the ideals and power of the music penetrated every corner of the land but was only ever sustained by the grit and ingenuity of the people involved on the ground level. We need a book like this for everywhere."--Guy Picciotto of Fugazi

"Punks in Peoria isn’t just a deep, heartfelt dive into the punk subculture of America’s quintessential small city. It’s an exquisite map of how music flows through social structures and between generations. Essential reading for anyone interested in how art impacts life.”--Jason Heller, author of Strange Stars: David Bowie, Pop Music, and the Decade Sci-fi Exploded

"Punks in Peoria is free of jargon, centers the stories of the people who actually helped build the scene, and speaks to the experiences of the small cities and towns that have been the lifeblood of punk rock in the United States. It is a model for good research on punk."--Zack Furness, author/editor of Punkademics: The Basement Show in the Ivory Tower

"Thirty years ago, Nirvana’s ‘Nevermind’ rocked the Midwest" by Dawson Barrett and Jonathan Wright in the Washington PostGet the companion albumRead an excerpt from the book on Literary HubRead an excerpt in the Chicago ReaderRead an interview with the authors in