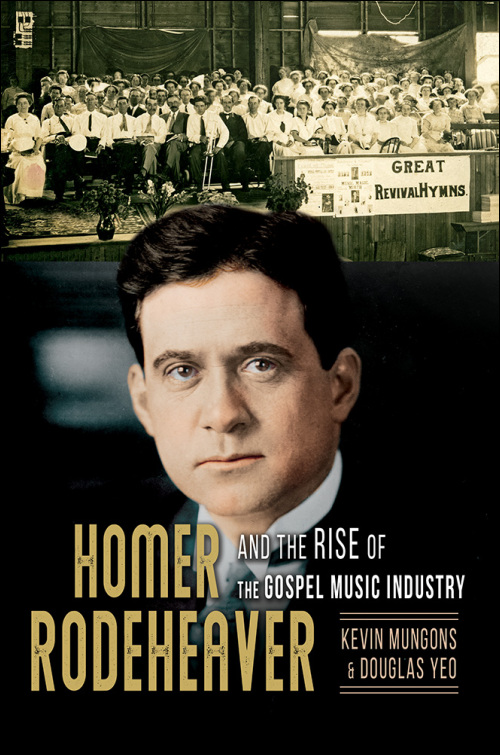 Homer Rodeheaver merged evangelical hymns and African American spirituals with popular music to create a potent gospel style. Kevin Mungons and Douglas Yeo examine his enormous influence on gospel music against the backdrop of Christian music history and Rodeheaver's impact as a cultural and business figure. Rodeheaver rose to fame as the trombone-playing song leader for evangelist Billy Sunday. As revivalism declined after World War I, Rodeheaver leveraged his place in America's newborn celebrity culture to start the first gospel record label and launch a nationwide radio program. His groundbreaking combination of hymnal publishing and recording technology helped define the early Christian music industry. In his later years, he influenced figures like Billy Graham and witnessed the music's split into southern gospel and black gospel.

Clear-eyed and revealing, Homer Rodeheaver and the Rise of the Gospel Music Industry is an overdue consideration of a pioneering figure in American music.

Kevin Mungons is a Chicago-based writer and editor. As backlist curator and editor for Moody Publishers, he champions content from 125 years of book publishing. He has worked as editorial director for nonprofit organizations, and continues to help authors and organizations tell their story. A longtime church musician, he researches and writes about gospel music, early recordings, and radio. Douglas Yeo has received acclaim as a teacher, author, and performing artist. Following his long career as bass trombonist of the Boston Symphony (1985-2012), he was professor of trombone at Arizona State University and now teaches at Wheaton College (Illinois). A graduate of Wheaton College and New York University, he is the author of five books and dozens of articles. He has performed, presented masterclasses, and held residencies on five continents. He received the International Trombone Association’s highest honor, the ITA Award, in 2014. His ongoing research interests include the intersection of music with faith, and musical instruments both ancient and modern. Visit him online at yeodoug.com and thelasttrombone.com.

"Like virtually all books in the University of Illinois's much-honored Music in American Life series, Homer Rodeheaver and the Rise of the Gospel Music Industry fills in significant blanks in our understanding of different aspects of music history. Mungons and Yeo elevate their contribution with meticulous detail and research; a penchant for finding fascinating, revealing stories and anecdotes; and a sparkling, highly readable prose style that's all too rare in most academic books." --Robert Darden, Christianity Today

"Mungons and Yeo have rescued a former icon of American religious life from undeserved historical obscurity, placing Homer Rodeheaver in the complex context of his times. . . . If you care about the Christian music industry and an era largely lost to history, you’ll want to read this book." --Stan Guthrie

"Refreshingly free of academic speak. . . . Homer Rodeheaver and the Rise of the Gospel Music Industry is more than a tale about the emergence of gospel singing and revivalism, it's a quintessentially American story about a quintessential American." --ARSC Journal

"Mungons and Yeo's book, Homer Rodeheaver and the Rise of the Gospel Music Industry, combines painstaking research with insightful sociological and musicological analysis. Although co-authored, the book has a unified narrative. . . . Even if one has only marginal interest in Home Rodeheaver as a person, this scholarly description of American society at the turn of the 20th century proves fascinating and illuminating." --International Trombone Association

"Kevin Mungons and Douglas Yeo’s biography of Homer Rodeheaver brightens an important corner of gospel music history that has gone unexplored for far too long. What they reveal in their remarkable portrait of 'Reverend Trombone' is a man both of his time and ahead of his time. It’s more than a tale of the emergence of gospel singing and revivalism, it’s a quintessentially American story about a quintessential American."--Robert Marovich, author of A City Called Heaven: Chicago and the Birth of Gospel Music

"I am truly taken by the book. It is good, informative, comprehensive, and free of the usual assortment of clichés, academic hems and haws, and over-spiritualization. It takes the often over-simplified view of music and revivalism and exposes it to a fascinating cross-weave of thought, content, and context which, to my embarrassment, I thought I had already had a handle on. I recommend it without reservation. There is no doubt in my mind that general readers and specialists alike will benefit from reading this book."--Harold Best, emeritus professor of music and dean emeritus of the Wheaton College Conservatory of Music