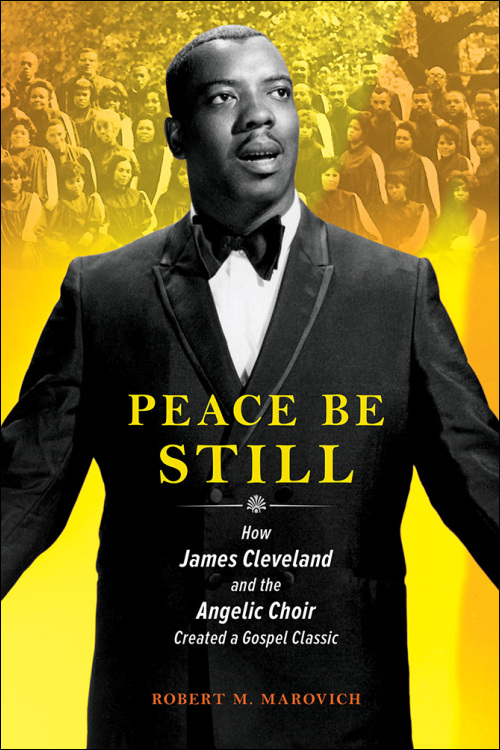 In September of 1963, Reverend Lawrence Roberts and the Angelic Choir of the First Baptist Church of Nutley, New Jersey, teamed with rising gospel star James Cleveland to record Peace Be Still. The LP and its haunting title track became a phenomenon. Robert M. Marovich draws on extensive oral interviews and archival research to chart the history of Peace Be Still and the people who created it. Emerging from an established gospel music milieu, Peace Be Still spent several years as the bestselling gospel album of all time. As such, it forged a template for live recordings of services that transformed the gospel music business and Black worship. Marovich also delves into the music's connection to fans and churchgoers, its enormous popularity then and now, and the influence of the Civil Rights Movement on the music's message and reception.

The first in-depth history of a foundational recording, Peace Be Still shines a spotlight on the people and times that created a gospel music touchstone.

Robert M. Marovich hosts Gospel Memories on Chicago's WLUW 88.7 FM and is founder and editor-in-chief of the Journal of Gospel Music, www.journalofgospelmusic.com. In 2019, he was nominated for a Grammy Award, Best Album Notes, for The Gospel According to Malaco. He is the author of A City Called Heaven: Chicago and the Birth of Gospel Music.

"James Cleveland’s contributions to gospel music have never been properly documented, but thanks to Marovich’s stunning work we have a treasure trove that richly repays us on every reading and hearing." --No Depression

"Marovich’s lucid account looks to a time when Black migrants from the South recreated their folkways in Northern cities—and how those urban settings changed the tone and volume of the music and culture soon enough. It’s the history of a song, the evolution of its meaning and of the gospel genre it influenced." --Shepherd Express

"My mother basically took Lawrence Roberts under her wing and for a brief moment, he was a part of the Drinkard Singers. She saw his calling to minister and encouraged him to answer that call. He was treated and considered a family member. He treated me kindly and we would speak by phone frequently when he moved to Georgia. He will always be fondly remembered as one I know cared about me and my well-being."--Dionne Warwick on Reverend Lawrence Roberts

"My friend, my confidant, a genius. You can't say it all at one time. Love him to death. Somebody told him, 'I'm gonna spit on your grave.' He told them, 'You better spit up; I'm gonna be in a mausoleum. It's gonna fall back in your face.' Love him much!"--Dorothy Norwood on Reverend James Cleveland