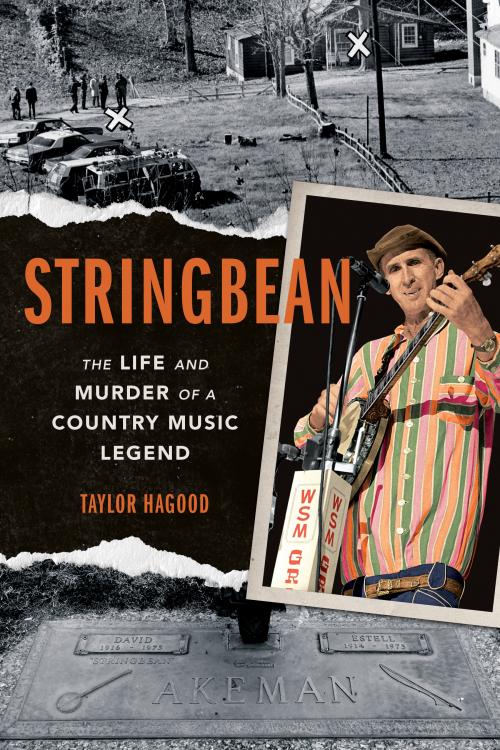 A beloved member of the country music community, David “Stringbean” Akeman found nationwide fame as a cast member of Hee Haw. The 1973 murder of Stringbean and his wife forever changed Nashville’s sense of itself. Millions of others mourned not only the slain couple but the passing of the way of life that country music had long represented.

Taylor Hagood merges the story of Stringbean’s life with an account of his murder and courtroom drama that followed. Mentored by Uncle Dave Macon and Bill Monroe, Stringbean was a bridge to country’s early days. His instrumental savvy and old-time singing style drew upon a deep love for traditional country music that, along with his humor and humanity, won him the reverence of younger artists and made his violent death all the more shocking. Hagood delves into the unexpected questions and uneasy resolutions raised by the atmosphere of retribution surrounding the murder trial and recounts the redemption story that followed decades later.

Taylor Hagood is a professor in the Department of English at Florida Atlantic University. His books include Faulkner, Writer of Disability and Secrecy, Magic, and the One-Act Plays of Harlem Renaissance Women Writers.

“Stringbean was one of the very first friends Doolittle, my husband, and I made when we first came to Nashville in 1960. He and his wife Estelle were some of the nicest folks you could find anywhere. . . . It was heartbreaking when we lost him and his wife.”--Loretta Lynn

“Stringbean and Estelle would be like your favorite aunt and uncle, or your favorite cousin. Any time we had a celebration, they were always there, and most of the time cooked for everybody. Those were precious times.”--Lulu Roman, Hee Haw star

“It was always a rare treat to get to see the hat-flipping, banjo-picking man from ole Kentucky on the television or old video tape. Stringbean was one of my first musical heroes as a kid while learning to play the banjo. I'm very excited to get this book! I can never get enough of Ole String! Thank you, Taylor!”--Leroy Troy, Grand Ole Opry star and 1996 National Old-Time Banjo Champion