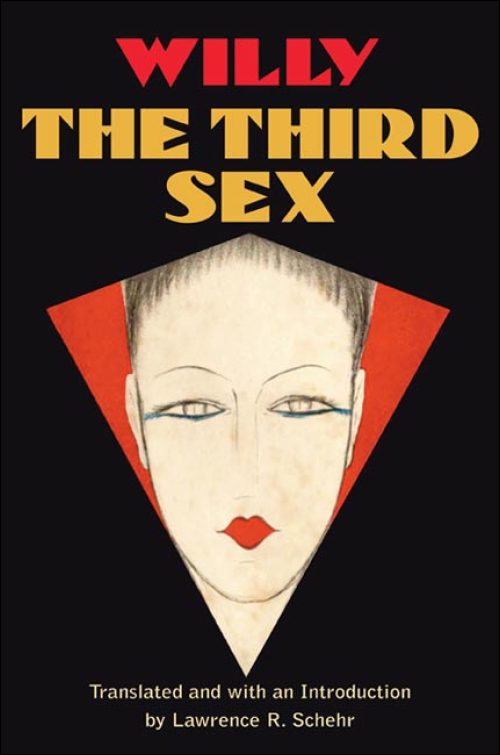 Thirty-two years before Simone de Beauvoir's classic The Second Sex, popular French novelist Willy published The Third Sex, a vivid description of the world of European homosexuals in France, Italy, and Germany during the late 1920s. Stepping directly into the heart of gay men's culture, Willy follows homosexual nightlife into music halls, nightclubs, casinos, bars, and saunas. While he finds drug and alcohol use, he also discovers homosexual publishers, scientific societies, group rivalries, and opinions--both medical and political--about the nature of homosexuality.

This first-ever English edition of The Third Sex provides a goldmine of information about a hidden gay culture and an unrivaled personal record of European mores between the world wars. In describing some of the most conspicuous homosexual personalities of the era, including the champion for tolerance Dr. Magnus Hirschfield and the transvestite American trapeze artist Barbette, Willy is notoriously free from prudery. An introduction and copious notes by translator Lawrence R. Schehr supply important background information on these colorful personalities and point out vital references throughout the text. In guiding readers through Willy's breezy and witty narrative, Schehr unpacks the fascinating allusions and delightful puns buried in this first-hand account of gay men's culture.

“Willy” is the pseudonym of Henry Gauthier-Villars, best remembered as the husband of Colette. He hired ghost writers whose work he signed as Willy, making the name various, mysterious, and wild. Lawrence R. Schehr is a professor in the Department of French at the University of Illinois, Urbana-Champaign. He is the author French Gay Modernism and other books.

"What a charming and peculiar bulletin from the past is this little book from 1927, supposedly written by a man famous in his day as a cultural impresario and libertine but now remembered as the husband of Colette. . . . Whoever wrote it, this slender volume offers a fascinating glimpse not so much of exotic homosexual practices but of something much more delicate and transitory: the moment just beforehomosexuality became an identity, before sexual acts had been organized into the solid categories we recognize and traffic in today. A collision of conflicting impulses and wildly incongruous discourses, 'The Third Sex' does not know what it is--'gay Baedeker,' cautionary tale, scientific treatise, pornographic handbook, literary essay, opportunity to slander the Italians and Germans--and that is what makes it so delightful."--New York Times Book Review

"Willy ends this strange and fascinating text with the old question: is it better to stay in the closet or openly celebrate one's sexuality? The questions of The Third Sex are those we seem[ed] to still be facing at the last quarter of the century."--Rain Taxi

"The Third Sex is by turns leering, sympathetic, impenetrable, tender, and hilarious, often all on the same page. . . . It maps a lost world not only of sex, but of the myriad things we modern folk once thought sex could be, and mean."--International Herald Tribune

“Well worth reading. The very idea of a widespread, trendy 1920s homosexuality is fascinating.”--Modernism/Modernity

“The Third Sex is a delightful read even while it provides us with valuable information--legal, scientific, pseudoscientific, anecdotal--toward a more complete assessment of the state of post-WWI queerdom. Lawrence Schehr is doing us a huge service in opening these pages that are like an archeological find.”--Robert Harvey, coeditor of Queer: Repenser les identités

"As an eminent scholar of late nineteenth- and early twentieth-century French literature and queer studies, Schehr brings an in-depth understanding of the language and culture of the period in which Willy was writing. This impeccable translation not only provides a wealth of cultural, intellectual, and historical information to readers of English; it also enriches and expands the canon of French literary and cultural studies."--Doris Y. Kadish, coeditor of Translating Slavery: Gender and Race in French Women's Writing, 1783-1823