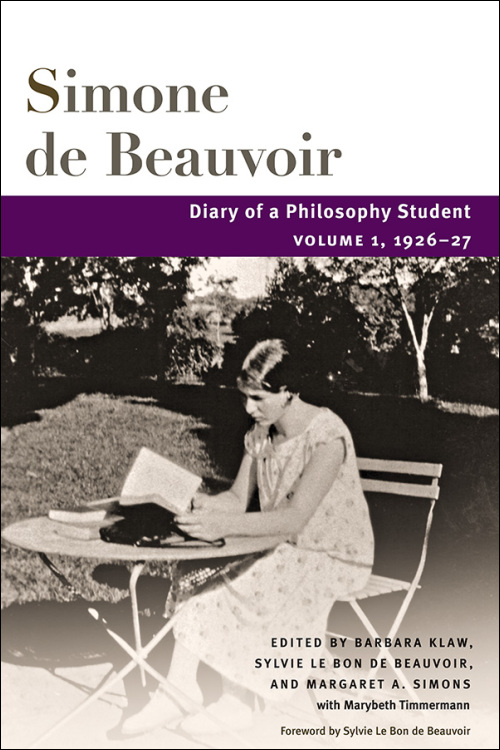 Simone de Beauvoir, still a teen, began a diary while a philosophy student at the Sorbonne. Written in 1926-27—before Beauvoir met Jean-Paul Sartre—the diaries reveal previously unknown details about her life and times and offer critical insights into her early intellectual interests, philosophy, and literary works.

Presented for the first time in translation, this fully annotated first volume of the Diary includes essays from Barbara Klaw and Margaret A. Simons that address its philosophical, historical, and literary significance. It remains an invaluable resource for tracing the development of Beauvoir’s independent thinking and her influence on philosophy, feminism, and the world.

Simone de Beauvoir (1908–86) was a French existentialist philosopher. Her works include The Second Sex (1949). Barbara Klaw (co-transcription, author of notes and annotations, and translator of this volume) is a professor emerita of French at Northern Kentucky University. She is the author of Le Paris de Simone de Beauvoir. Sylvie Le Bon de Beauvoir, adopted daughter and literary executor of Simone de Beauvoir, is the editor of Lettres à Sartre and many other works by Beauvoir. Margaret A. Simons is a professor of philosophy at Southern Illinois University, Edwardsville, and author of Beauvoir and “The Second Sex.” Marybeth Timmermann is a contributing translator and editor of "The Useless Mouths" and Other Literary Writings, and other works by Beauvoir.

"This diary increases our admiration for Beauvoir's heroic determination to make something of herself. A precious document."--Bookforum

"This is a groundbreaking and extremely important work for feminists, philosophers, and scholars of autobiography, and a welcome academic corrective to the edited, abridged, and simplified commercial representations of this important and complex twentieth-century French feminist, philosopher, and writer."--Kentucky Philological Review

"Barbara Klaw, Sylvie Le Bon de Beauvoir, Margaret Simons, and Marybeth Timmerman have given the world a remarkable gift. This volume is organized, annotated, and contextualized superbly. How much richer and more profound [Beauvoir's] corpus becomes with the addition of these priceless writings. The publication of her diaries will only further elevate her philosophical and literal legacy."--H-France Review

"This indispensable volume offers a panorama of Beauvoir's intellectual preoccupations. The translators and editors are to be applauded for producing such a valuable contribution to Beauvoir studies."--French Studies

"An admirable example of careful translating and editing. The diary presents an opportunity for opening an avenue of Beauvorian scholarship in aesthetics."--APA Newsletter

"Both volumes are strong and important contributions to feminist philosophy, not only in their themes but in significantly addressing these themes with reference to gendered human existence. I recommend them to anyone who is interested in understanding the making of a feminist philosopher, especially to early researchers working on Beauvoir, to undergraduates trying to understand philosophy, as well as to scholars seeking to understand Beauvoir and her philosophical themes." --Hypatia

“This is a magnificent piece of work. It is an engaging read and lets English readers to whom French is not accessible have first-hand access to some now much-discussed evidence regarding the independence of Beauvoir’s thought. The translation is beautiful, smooth, and true. A real coup!”--Claudia Card, author of The Cambridge Companion to Simone de Beauvoir

“This book is an enormously significant event which scholars have been eagerly awaiting for quite some time. Study of Beauvoir’s diaries not only alerts us to fascinating and unknown influences on her intellectual and personal development, but it could also form the basis for an amazing study of how the raw material of adolescent emotion, all its masochism and its narcissism, became transmuted into the readable and beautiful texts from which we can all learn so much.”--Meryl Altman, DePauw University