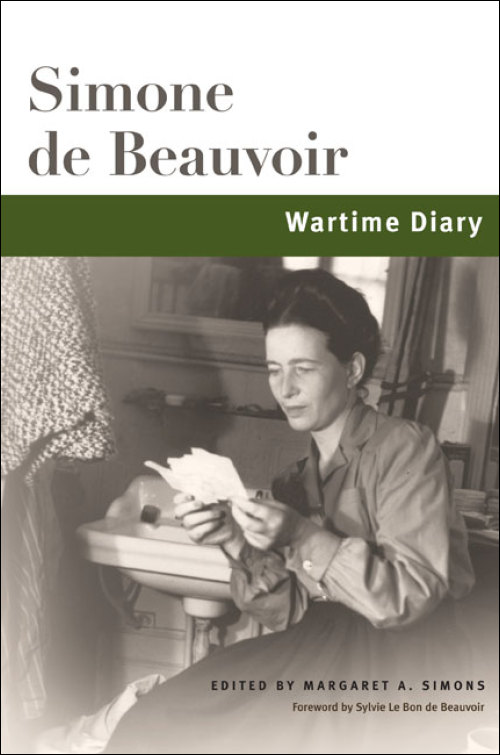 Beauvoir's clandestine affair with Jacques Bost and sexual relationships with various young women challenge the conventional picture of Beauvoir as the devoted companion of Jean-Paul Sartre. At the same time, her account of completing her novel She Came to Stay at a time when Sartre had just begun Being and Nothingness questions the traditional view of Beauvoir’s novel as merely illustrating Sartre’s philosophy.

Wartime Diary also traces Beauvoir's philosophical transformation as she broke from the prewar solipsism of She Came to Stay in favor of the postwar political engagement of The Second Sex. Beauvoir's emerging existentialist ethics reflect the dramatic collective experiences of refugees fleeing German invasion and life under Nazi occupation. The evolution of her thought also reveals the courageous reaffirmation of her individuality in constructing a humanist ethics of freedom and solidarity.

This edition also features previously unpublished material, including her musings about consciousness and order, recommended reading lists, and notes on labor unions. In providing new insights into Beauvoir’s philosophical development, the Wartime Diary promises to rewrite a crucial chapter of Western philosophy and intellectual history.

Simone de Beauvoir (1908–86) was a French existentialist philosopher. Her works include Ethics of Ambiguity (1947) and The Second Sex (1949).Sylvie Le Bon de Beauvoir, adopted daughter and literary executor of Simone de Beauvoir, is the editor of Lettres à Sartre and many other works by Beauvoir. Margaret A. Simons is a professor and chair of philosophy at Southern Illinois University Edwardsville and the author of Beauvoir and The Second Sex: Feminism, Race and the Origins of Existentialism. Anne Deing Cordero is a professor emerita of French at George Mason University.

“What gives these notebooks additional zest and texture are allusions to an unexpectedly wide range of writers the diarist read during these searing days. . . . English readers are now afforded a very different portrait of the feminist philosopher approaching middle age in this well-annotated volume.”--Publishers Weekly

“The revelations in Beauvoir’s Wartime Diary are stunning, stimulating, and exciting. This diary shows the importance of Beauvoir’s influence on Sartre and the originality of her own thought. It gives the English-speaking audience a first glimpse into the world in which Beauvoir wrote some of her most important novels and philosophical books.”--Kelly Oliver, editor of The French Feminism Reader

“There is nothing to compete with Beauvoir’s Wartime Diary; the translation is clear, jargon-free, and engaging. Not only is the diary a very significant contribution to Beauvoir scholarship, but it is also an amazing eyewitness testimonial of what daily life in and near Paris was like for civilians under the German occupation. Once I started reading it, I literally couldn’t put it down.”--Claudia Card, author of The Cambridge Companion to Simone de Beauvoir