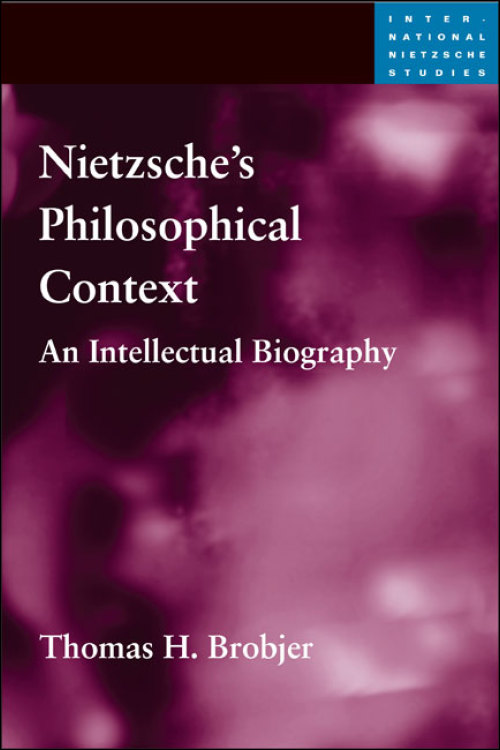 Friedrich Nietzsche was immensely influential and, counter to most expectations, also very well read. As scholars consider his place in European philosophy and assess how his ideas developed, much speculation surrounds how and what Nietzsche read. An essential new reference tool for those interested in his thinking, Nietzsche's Philosophical Context identifies the chronology and huge range of philosophical books that engaged him. Rigorously examining the scope of this reading, Thomas H. Brobjer consulted over two thousand volumes in Nietzsche's personal library, as well as his book bills, library records, journals, letters, and publications. This meticulous investigation also considers many of the annotations in his books. In arguing that Nietzsche's reading often constituted the starting point for, or counterpoint to, much of his own thinking and writing, Brobjer's study provides scholars with fresh insight into how Nietzsche worked and thought; to which questions and thinkers he responded; and by which of them he was influenced. The result is a new and much more contextual understanding of Nietzsche's life and thinking.

"This tremendously useful resource will be consulted by every scholar concerned with Nietzche's philosophical context for years to come."--British Journal for the History of Philosophy

"An extremely detailed and well organized study of Nietzsche's philosophical reading, Nietzsche's Philosophical Context provides information that is not available anywhere else. This volume will make a very important contribution to scholarship on Nietzsche, and will immediately become a regularly-consulted resource. Any one who is interested in the origins and development of Nietzsche's views, and anyone tracing his relation to one or another of his philosophical predecessors, will find this book enormously useful--a goldmine of information."--John Richardson, author of Nietzsche's New Darwinism and Nietzsche's System

"Nietzsche's Philosophical Context supplies by far the richest single fund of information concerning what Nietzsche actually read in the philosophical literature, when he read it, and how this reading influenced his work. Those interested in understanding, interpreting, and evaluating Nietzsche's thought should find this study of great interest. It enables us to locate in a much fuller way Nietzsche's place in the philosophic tradition."--Ivan Soll, professor of philosophy, University of Wisconsin, Madison