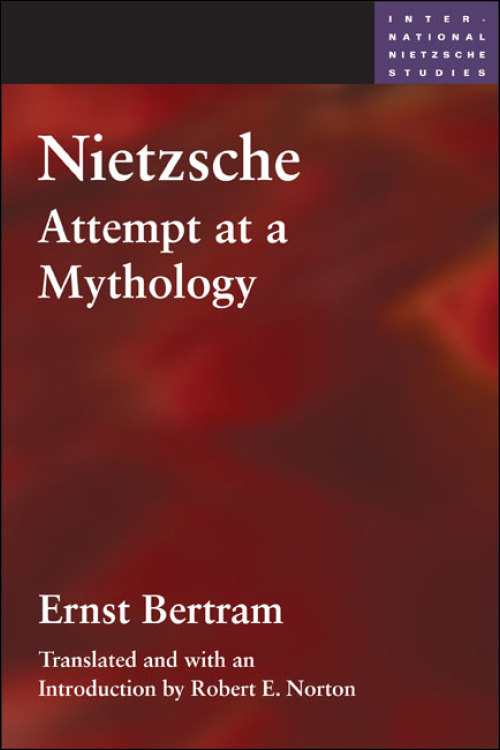 First published in 1918, Ernst Bertram’s Nietzsche: Attempt at a Mythology substantially shaped the image of Nietzsche for the generation between the wars. It won the Nietzsche Society’s first prize and was admired by luminous contemporaries including André Gide, Hermann Hesse, Gottfried Benn, and Thomas Mann. Although translated into French in 1932, the book was never translated into English following the decline of Nietzsche’s and Bertram’s reputations after 1945. Now, with Nietzsche’s importance for twentieth-century thought undisputed, the work by one of his most influential interpreters can at last be read in English.

Employing a perspectival technique inspired by Nietzsche himself, Bertram constructs a densely layered portrait of the thinker that shows him riven by deep and ultimately irresolvable cultural, historical, and psychological conflicts. At once lyrical and intensely probing, richly complex yet thematically coherent, Bertram’s book is a masterpiece in a forgotten tradition of intellectual biography.

Ernst Bertram (1884–1957) was a recognized scholar of German literature and culture, as well as an accomplished poet. Although Nietzsche remained his only monograph, he published numerous essays and several books of poetry. Robert E. Norton is a professor of German at the University of Notre Dame and the author of Secret Germany: Stefan George and His Circle.

“Ernst Bertram’s seminal work ... not only highlighted Nietzsche’s own revival of the mythical dimension as essential to creative human activity but also sought, in the heroizing of spirit of the Stephan George circle (with which Bertram was associated) to render Nietzsche himself into a latter-day prophet—a dynamic, living national myth.”--Times Literary Supplement

"A major contribution to Nietzsche-research and scholarship."--Journal of Nietzsche Studies

"An important book and a masterful translation."--German Quarterly

“An imaginative and robust reading of Nietzsche; the great value of this English translation is the book’s historical role in consequential cultural developments provoked by figurations of Nietzsche. A significant contribution to Anglophone readers who are interested in Nietzsche’s philosophy generally, and particularly in the historical reception of his writings.”--Lawrence J. Hatab, author of Nietzsche’s Life Sentence: Coming to Terms with Eternal Recurrence

“Robert E. Norton has done an admirable job in preparing this English translation of a provocative critical study of Nietzsche. An important link between Nietzsche’s reception in the Weimar Period and the philosopher’s cooptation by the Nazis in the 1930s. This translation is simply splendid--flowing, precise, and sensitive to nuance.”--Marion Faber, translator of Human, All Too Human and Beyond Good and Evil