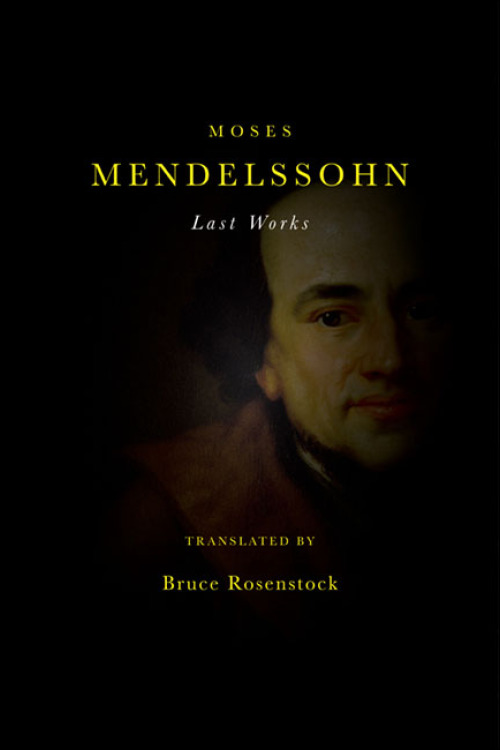 Moses Mendelssohn (1729–1786) was the central figure in the emancipation of European Jewry. His intellect, judgment, and tact won the admiration and friendship of contemporaries as illustrious as Johann Gottfried Herder, Gotthold Ephraim Lessing, and Immanuel Kant. His enormously influential Jerusalem (1783) made the case for religious tolerance, a cause he worked for all his life.

Last Works includes, for the first time complete and in a single volume, the English translation of Morning Hours: Lectures on the Existence of God (1785) and To the Friends of Lessing (1786). Bruce Rosenstock has also provided a historical introduction and an extensive philosophical commentary to both texts.

At the center of Mendelssohn's last works is his friendship with Lessing. Mendelssohn hoped to show that he, a Torah-observant Jew, and Lessing, Germany's leading dramatist, had forged a life-long friendship that held out the promise of a tolerant and enlightened culture in which religious strife would be a thing of the past.

Lessing's death in 1781 was a severe blow to Mendelssohn. Mendelssohn wrote his last two works to commemorate Lessing and to carry on the work to which they had dedicated much of their lives. Morning Hours treats a range of major philosophical topics: the nature of truth, the foundations of human knowledge, the basis of our moral and aesthetic powers of judgment, the reality of the external world, and the grounds for a rational faith in a providential deity. It is also a key text for Mendelssohn's readings of Spinoza. In To the Friends of Lessing, Mendelssohn attempts to unmask the individual whom he believes to be the real enemy of the enlightened state: the Schwärmer, the religious fanatic who rejects reason in favor of belief in suprarational revelation.

Bruce Rosenstock is an associate professor of religion at the University of Illinois at Urbana-Champaign. His other books include New Men: Conversos, Christian Theology, and Society in Fifteenth-Century Castile and Philosophy and the Jewish Question: Mendelssohn, Rosenzweig, and Beyond.

"An expertly produced volume that will contribute to a vibrant conversation on the fate of the Enlightenment, the beginning of modern liberal Judaism, and the origins of German idealism. Students of eighteenth-century German thought will henceforth refer to this work."--Peter Fenves, author of The Messianic Reduction: Walter Benjamin and the Shape of Time

"This volume will surely be a widely welcomed contribution to the study of modern Jewish thought and European intellectual history. Bruce Rosenstock's elegant translation and scholarly introduction render Mendelssohn's last works accessible to beginning and advanced students of general and Jewish intellectual history."--Paul Mendes-Flohr, coeditor of The Jew in the Modern World: A Documentary History