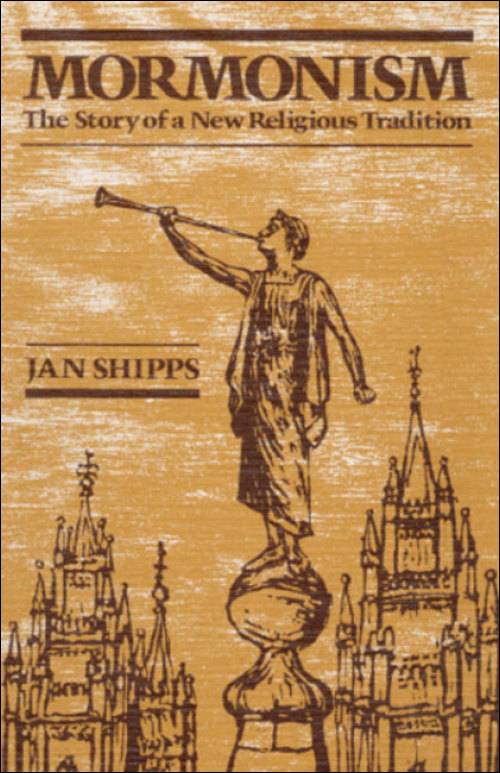 "Without fully and consciously realizing that they were doing so, the followers of Jesus established a new religious tradition. This book tells the story of yet another assembly of saints whose history, I believe, is in many respects analogous to the history of those early Christians who thought at first that they had found the only proper way to be Jews. Mormonism started to grow away from traditional Christianity almost immediately upon coming into existence. It began as a movement that understood itself as Christian, but. . . these nineteenth-century Latter-day Saints (as they came to be called) embarked on a path that led to developments that now distinguish their tradition from the Christian tradition as surely as early Christianity was distinguished from its Hebraic context."--From the preface

Jan Shipps is Professor Emerita of History and Religious Studies at Indiana University-Purdue University at Indianapolis.

"Bushman's statement that Shipps's collection ‘may be the most brilliant book ever written on Mormonism' is a judgment I am inclined to share."--David Brion Davis, New York Review of Books

"In Mormonism Jan Shipps combines the impressive skills of a distinguished historian, thorough researcher, and lucid writer with a quality rare among those who observe and write about the Church of Latter-day Saints: she understands us."--Jerry P. Cahill, Church of Jesus Christ of Latter-day Saints

"Without a doubt, Shipps has emerged as the most knowledgeable non-Mormon scholar in the field of Mormon studies."--Thomas G. Alexander, Dialogue: A Journal of Mormon Thought

"A highly sophisticated, scholarly analysis of cultural and religious origins and development. . . . Shipps is not only a leading authority on Mormonism but a cultural historian of a very high order."--Sterling M. McMurrin, Essays and Monographs in Colorado History

"This may be the most brilliant book ever written on Mormonism. It is insightful, inspiring, and original and sure to become a landmark work on the subject."--Richard L. Bushman, author of Joseph Smith and the Beginnings of Mormonism