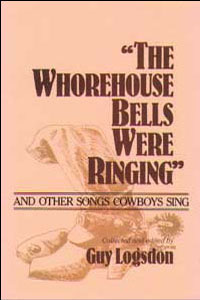 Think cowboys croon lullabies to cattle at night? Not exactly. Whether 'round the campfire or in the barroom, cowboys love a lusty chorus of the kinds of songs their mothers never taught them. Guy Logsdon painstakingly sought out, listened to, and recorded the bawdy songs of America's real working cowboys. Honest and hilarious songs ranging from "Little Joe, the Wrangler" to "Boring for Oil" and "Old Man's Lament" reveal an affection for humor--sometimes crude, sometimes clever--as well as an affable warts-and-all view of human nature.

Guy Logsdon lectured and performed as America's Senior Cowboy Song-Poetry Scholar. He was director of libraries and a professor of American folklife at the University of Tulsa. He was the coauthor of Woody's Road; Woody Guthrie's Letters Home, Drawings, Photos, and Other Unburied Treasures and Saddle Serenaders. He died in 2018.

"One of the finest works to come out in recent years on cowboy songs, in addition to being the first good collection of the cowboy's bawdy material. . . . A must for anyone who is a student of cowboy music--or anyone who just likes the sound of dirty subject matter rhyming."--Hal Cannon, Journal of Country Music

"A brave and honest step toward increasing our understanding of what cowboys really sing."--Bob Bovee, Old Time Herald

"A thorough piece of scholarship and collectanea and a valuable, welcome addition to cowboy song literature."--Keith Cunningham, Mid-America Folklore

"Logsdon has written the book with a scholar's attention to detail. But what shows through the scholarship is the collector's enthusiasm for the material. . . . A superb job in a difficult area."--Angus Kress Gillespie, Journal of American History