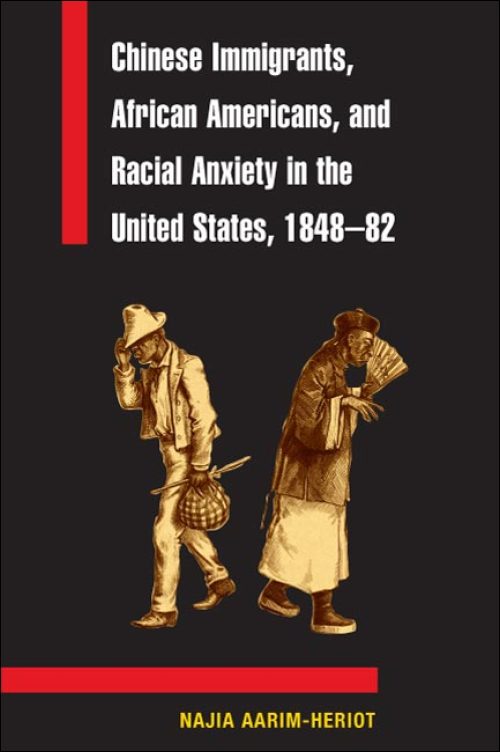 The “Chinese question” and the “Negro problem” were bound up with one another in nineteenth-century America. Indeed, the negative stereotypes, exclusionary laws, and incendiary rhetoric employed against both populations bore striking similarities.

Najia Aarim-Heriot forcefully demonstrates that the anti-Chinese sentiment behind the passage of the Chinese Exclusion Act of 1882 is inseparable from the racial double standards applied by mainstream white society toward white and nonwhite groups during the same period. Aarim-Heriot argues that previous studies on American Sinophobia have overemphasized the resentment labor organizations felt toward incoming Chinese workers. As a result, scholars have overlooked the broader ways in which the growing nation sought to define and unify itself through the exclusion and oppression of nonwhite peoples.

A challenge to traditional approaches to Chinese American history, Chinese immigrants, African Americans, and Racial Anxiety in the United States, 1848–82 offers a holistic examination of American Sinophobia and the racialization of national immigration policies.

Najia Aarim-Heriot is an associate professor in the Department of History at the State University of New York at Fredonia.

"In this meticulously researched work, Najia Aarim-Heriot has broken new and important ground in the study of American racial formations and interracial relations. . . . It points to the direction that more work in ethnic studies should follow so that ethnoracial groups are not studied alone but in relation to others."--Pacific Affairs

"Through an exhaustive survey of political debates and proceedings emanating almost exclusively from California and Washington, D.C., Najia Aarim-Heriot seeks to reframe the origins and consequences of Chinese exclusion from the United States."--Pacific Northwest Quarterly

"This book provides a new framework for understanding nineteenth century anti-Chinese sentiment. Aarim-Hariot's research and the way she connects her sources should help historians think about racism beyond the biracial paradigm which has entrenched us for too long."--Left History

"In her carefully researched, well-argued and thoughtful book, Aarim-Heriot masterfully unravels the ideas that lie at the core of national politics, contextualizing Caucasian attitudes toward Chinese immigrants within the broad and comparative framework of race."--John David Smith, author of Slavery, Race and American History