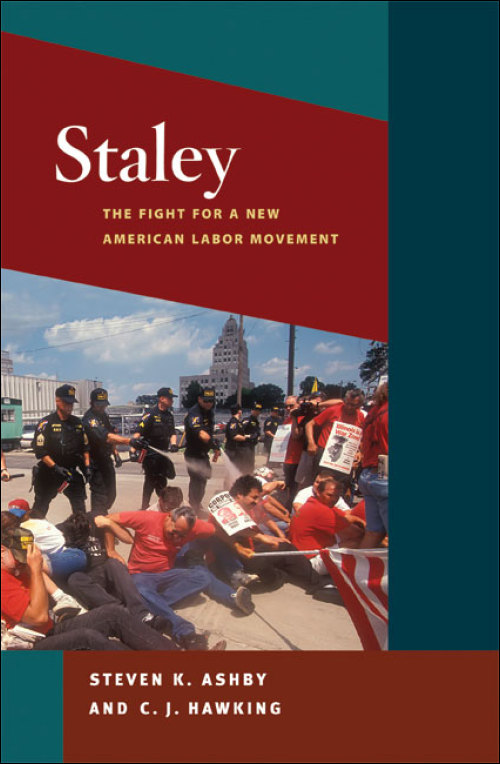 This on-the-ground labor history chronicles the bitterly contested labor conflict in the mid 1990s at the A. E. Staley corn processing plant in Decatur, Illinois, where workers waged one of the most hard-fought struggles in recent labor history. When the company launched a full-scale assault on its workers, Allied Industrial Workers Local 837 responded by educating and mobilizing its members, organizing strong support from the religious and African American communities, building a nationwide solidarity movement, and engaging in nonviolent civil disobedience at the plant gates. Through scores of interviews and videotapes of every union meeting, the authors bring the workers' voices to the fore and reveal their innovative tactics that inform and strengthen today's labor movement.

Steven K. Ashby is an associate clinical professor in the Chicago Labor Education Program in the School of Labor and Employment Relations, University of Illinois at Urbana-Champaign. C. J. Hawking is a United Methodist pastor and the executive director of the faith-based workers' rights group Arise Chicago. Both were Staley workers' solidarity organizers.

“Sympathetically written from the viewpoint of the most aggressive union members and their cadre of supporters . . . . This is a valuable book.”--Union News

"A powerful, passionate, and informative blow-by-blow account. . . . This book offers a how-to on building a militant, democratic, and effective organization."--Journal of Illinois History

"Staley is a masterful and cautionary account that brilliantly captures the obstacles and dilemmas faced by organized labor at the close of the twentieth century."--The Annals of Iowa

"A vital contribution to a discussion of how to rebuild the labor movement today."--International Socialist Review

"Staley ... is important to read. It shows the courage of ordinary people who are transformed by their experiences, and hopefully it will also inspire a new generation to take up the fight to transform unions into institutions that are run by workers in their own interests."--Against the Current

"A compelling analysis of a decisive moment in the struggle for social democracy."--Labour/Le Travail

"One of the best accounts of a labor conflict ever written. Essential reading."--Jeremy Brecher, author of Strike!

"An extraordinary achievement, indispensable to trade unionists."--Staughton Lynd, author of The New Rank and File

"Stunningly rich and detailed. The strategic discussions are magnificent and unmatched."--Peter Rachleff, author of Hard-Pressed in the Heartland: The Hormel Strike and the Future of the Labor Movement

"A magnificent achievement. It will become a classic."--Bruce Nissen, author of Which Direction for Organized Labor? Essays on Organizing, Outreach, and Internal Transformation

"An inspiring story of vibrant and relentless rank-and-file resistance."--Ruth Milkman, author of L.A. Story: Immigrant Workers and the Future of the U.S. Labor Movement

"Rarely is there a book as compelling in its description of a real-life struggle."--Bill Fletcher, coauthor of Solidarity Divided: The Crisis in Organized Labor and a New Path toward Social Justice

"One of the best analyses of a worker struggle I ever read. A must read for union organizers and advocates for social justice."--Eliseo Medina, executive vice president of Service Employees International Union

"This is a very good book for understanding those tremendous hurdles workers must fight to overcome when they stand up for themselves and their families."--Cecil E. Roberts, president of United Mine Workers of America

"In Staley, Ashby and Hawking point the way forward for American labor."--Kim Moody, cofounder of Labor Notes and author of U.S. Labor in Trouble and Transition: The Failure of Reform from Above, The Promise of Revival from Below

"The narrative bristles with strategic lessons and insights."--James R. Barrett, author of William Z. Foster and the Tragedy of American Radicalism

"The book combines analytic comprehensiveness with moving first-person accounts that texture the conflict and make the meaning of consciousness, as it changes and transforms itself, come alive to the reader."--Nelson Lichtenstein, author of State of the Union: A Century of American Labor

"Staley is a must read for anyone interested in community and religious partnerships with labor. Its passionate style and historical accuracy engage the reader from beginning to end."--Kim Bobo, executive director of Interfaith Worker Justice and author of Wage Theft in America: Why Millions of Working Americans Are Not Getting Paid-And What We Can Do About It

"The diminution of the effectiveness of the labor movement's power and the distancing of organized religion from this historic organ of social justice have weakened both church and labor, while muting a once united voice for justice for working people. Our collective silence encouraged three decades of greed and allowed callous disregard for the most vulnerable in America to become national policy. This book suggest that this schism can be healed and this nation returned to those whose work has made so much possible. May it be so."--Bishop C. Joseph Sprague, The United Methodist Church

Awarded the Certificate of Superior Achievement by the Illinois State Historical Society, 2010. Awarded the C.L.R. James Prize for Best Book in Working-Class Studies by the Working-Class Studies Association, 2010. Tied for Best Book related to the field of Labor Studies published in 2007-2009 from the United Association for Labor Educators (UALE), 2010.

Visit the authors' book site for more information about Staley, including text of original documents, photos, and updates on the people featured in the books.Visit the authors' blog for news on upcoming events and "extras" related to the book.Author Stephen K. Ashby Talks about the Chicago Teachers’ Strike