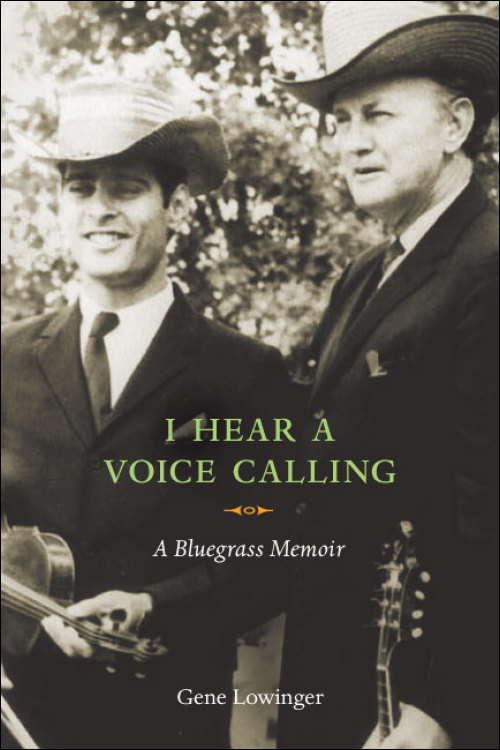 During the final years of Bill Monroe's life, bluegrass fiddler Gene Lowinger took a series of on- and off-stage photographs of Monroe on the road--preparing for shows, performing, interacting with fans and audiences--and in informal settings with family, friends, and fellow musicians. This book presents these photos of Monroe's last years as well as other photos documenting Lowinger's involvement with the bluegrass scene beginning in the early 1960s. As a fiddler for Monroe, Lowinger was given unique access to Monroe's private life, and his photographs capture poignant scenes, from energetic performances to moments of quiet repose.

Lowinger's photos accompany his own story of a New Jersey boy obsessed with folk and bluegrass music, and he recounts college trips to country music parks in Pennsylvania to see Lester Flatt, Earl Scruggs, Jimmy Martin, Mac Wiseman, and Bill Monroe; his stints as a fiddler for the New York Ramblers and Blue Grass Boys; and his memories of playing at the Grand Ole Opry and music festivals. A photographic reflection on Bill Monroe's public and private life, I Hear a Voice Calling also testifies to the bluegrass master's profound mentorship and guidance.

Gene Lowinger is a freelance photojournalist based in New York and New Jersey. The first "Northern" fiddler to join the ranks of the Blue Grass Boys, Lowinger is also the author of Bluegrass Fiddle, one of the first books to accurately capture the bluegrass fiddle style in standard musical notation.

"A welcome addition to the growing list of bluegrass memoirs."--Bluegrass Unlimited

"One cannot overrate the importance of either the photographs or the memoir in terms of [Bill] Monroe, who is one of the most important American vernacular musicians of the last century. Highly recommended."--Choice

"The sense of an era that has passed, of a time now far distant when giants walked the earth and played the Grand Ole Opry is perfectly captured in dozens of rare and relishable on-stage and behind-the-scenes images."--R2

"One cannot overrate the important of either the photographs or the memoir in terms of [Bill] Monroe, who is one of the most important American vernacular musicians of the last century. Highly recommended."--Choice

"Bluegrass insiders will delight in Lowinger's detailed descriptions of [Bill Monroe's] interactions alongside candid photographs."--Sing Out!

"An outstanding job in characterizing Bill Monroe in his stories, and the reader gets a good sense of what the life as a Bluegrass Boy in the mid-1960s must have been like, living and working with Monroe."--Journal of Folklore Research

"I've known Gene Lowinger since our early days in the urban bluegrass scene of the sixties. His photographs have always offered unique perspectives on unique subjects. Now they are skillfully melded with personal remembrances of his own singular career as a 'Jewish Blue Grass Boy.'"--David Grisman, mandolinist and composer

"A vivid, emotional, and poignant look at a unique era in bluegrass music, captured in words and photographs by a man who not only studied the music, but performed it and toured with the master as a member of his band."--Douglas B. Green (Ranger Doug), guitarist and vocalist of Riders in the Sky and author of Singing in the Saddle: The History of the Singing Cowboy

"A fascinating meditation on the nature of creativity and mentorship. Intimate and moving, funny and profound, Lowinger's photographs powerfully represent the indomitable Bill Monroe in his last years as a performer."--Erika Brady, author of A Spiral Way: How the Phonograph Changed Ethnography