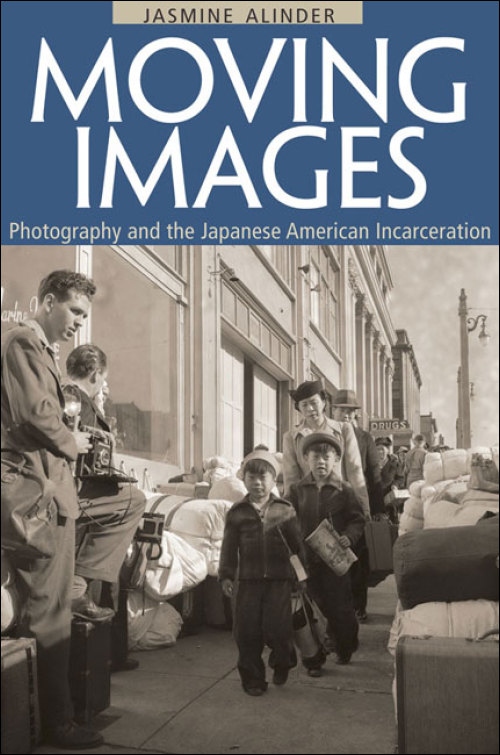 When the American government began impounding Japanese American citizens after Pearl Harbor, photography became a battleground. The control of the means of representation affected nearly every aspect of the incarceration, from the mug shots criminalizing Japanese Americans to the prohibition of cameras in the hands of inmates. The government hired photographers to make an extensive record of the forced removal and incarceration but forbade Japanese Americans from photographically documenting the conditions of the camps or any aspect of their lives. In this insightful study, Jasmine Alinder explores the photographic record of the imprisonment in war relocation centers such as Manzanar, Tule Lake, Jerome, and others. She investigates why photographs were made, how they were meant to function, and how they have been reproduced and interpreted subsequently by the popular press and museums in constructing versions of public history.

Considering such factors as artistic intention, institutional deployment, critical interpretation, and popular reception, Alinder provides calibrated readings of the photographs from this period. She uncovers the tension between Dorothea Lange's moving and critical images of the camps and the War Relocation Authority's blindly positive captions. She also analyzes Ansel Adams's attempt to combat negative war propaganda through humanizing photographs of Japanese Americans and locates the limits of such a counternarrative in the midst of a national mobilization against Japan.

Moving Images examines the work of Japanese American photographers operating both during and after the incarceration, including Manzanar inmate Toyo Miyatake, who constructed his own camera to document the complicated realities of camp life for his fellow inmates. More recently, contemporary artists Patrick Nagatani and Masumi Hayashi have used photography to reckon with the legacy of incarceration by journeying to the camp sites and creating photographs that bridge the intergenerational divides between their parents, themselves, and their children.

Illustrated with more than forty photographs, Moving Images reveals the significance of the camera in the process of incarceration as well as the construction of race, citizenship, and patriotism in this complex historical moment.

Jasmine Alinder is an assistant professor of history at the University of Wisconsin-Milwaukee.

"Alinder's fifty-year perspective yields one of the most balanced and informative books on documentary photographs in general and the internment of Japanese Americans in particular. This is a gem of a book. Essential."--Choice

"Alinder handles her material skillfully, and in concise and readable style. Her judgments show an incisive mind, and one that resists oversimplification."--American Journalism

"An excellent history of the incarceration . . . this is valuable for anyone interested in Japanese-American history."--Multicultural Review

"A beautiful and worthwhile read."--The Journal of American History

"A powerful, incisive monograph on the varied strategies of photographers and subjects at a time of great upheaval and its aftermath."--American Historical Review

"Contributes significantly to making the World War II incarceration of Japanese Americans a part of public memory. . . . A book that gracefully navigates the space between academic and public discourse."--American Studies

"A sophisticated and deeply historical book that illustrates the multiple roles photographs played in the internment of Japanese Americans during WWII. In addition to detailing how U.S. authorities turned photography against Japanese Americans, the book wisely attends to how the internees and their descendants used the medium to tell competing stories of their incarceration, allegiances, and identities. It is a book sure to appeal to photohistorians, art historians, and scholars of Asian American history."--Martin A. Berger, author of Sight Unseen: Whiteness and American Visual Culture

"A dark stain on our country's history, the incarceration of Japanese Americans during World War II brought about a wide range of responses, from quiet grief to angry protest. In Moving Images Jasmine Alinder shows how photography was a key participant in this history and how pictures represented, managed, and confronted such a brutal and dehumanizing set of experiences. This is a very fine and timely book."--Anthony Lee, author of A Shoemaker's Story: Being Chiefly about French Canadian Immigrants, Enterprising Photographers, Rascal Yankees, and Chinese Cobblers in a Nineteenth-Century Factory Town