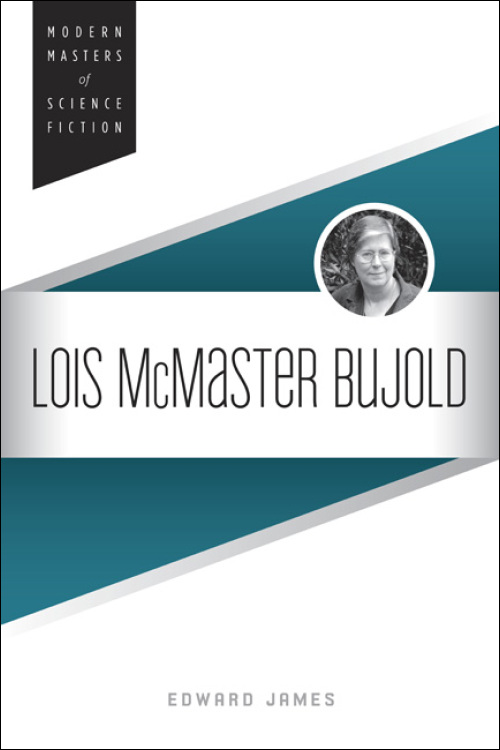 Lois McMaster Bujold has won four Hugo Awards for Best Novel, a number matched only by Robert Heinlein. Her ongoing Vorkosigan series redefined space opera with its emotional depth and explorations of themes such as bias against the disabled, economic exploitation, and the role of women in society.

Acclaimed science fiction scholar Edward James traces how Bujold emerged from fanzine culture to win devoted male and female readers despite working in genres--military SF, space opera--perceived as solely by and for males. Devoted to old-school ideas such as faith in humanity and the desire to probe and do good in the universe, Bujold simultaneously subverted genre conventions and experimented with forms that led her in bold creative directions. As James shows, her iconic hero Miles Vorkosigan--unimposing, physically impaired, self-conscious to a fault--embodied Bujold's thematic concerns. The sheer humanity of her characters, meanwhile, gained her a legion of fans eager to provide her with feedback, expand her vision through fan fiction, and follow her into fantasy.

The first full-length study of one of the most popular contemporary writers of science fiction and fantasy, Lois McMaster Bujold will both enlighten fans and set the foundations for further study of her works.

Edward James is Emeritus Professor of Medieval History at University College Dublin. He co-edited the Hugo Award-winning Cambridge Companion to Science Fiction and is the author of Science Fiction in the Twentieth Century.

"James traces Bujold's career from fanzine culture to genre superstar and shows how she overcame old-school ideas that military science fiction and space opera were exclusively a boys' playground."--Kirkus Reviews

"The University of Illinois is to be commended for its series of single-author studies, Modern Masters of Science Fiction. Lois McMaster Bujold is a worthy subject of this latest addition to that series. . . . This readable and succinct book is all the more welcome."--Times Literary Supplement

"James's text signals a growing (and long overdue) recognition of an author who has been critically neglected since her emergence in 1986."--Science Fiction Studies

"James's celebration of Bujold is impressive. The handling of the narrative threads and characters that intersect across Bujold's broad range of work is skillfully executed and the attention to detail explaining the merits and rationale of each of Bujold's novels and short stories is superb."--Foundation

"James's substantial insights, especially the discussions of Bujold's fantasy novels, are of value to the critic and scholar alike."--SFRA Review

"What James is particularly good at is placing Bujold in her context in science fiction history: what authors she would have read growing up, who were her likely influences, what else was being published at the time she started appearing in Astounding. A real pleasure to read. This could serve as a textbook for a class on Bujold."--Janet Brennan Croft, editor of Lois McMaster Bujold: Essays on a Modern Master of Science Fiction and Fantasy

"Edward James's comprehensive study promises to make a central contribution to science fiction studies, as it traces the ways Bujold has inherited and reworked the genres of space opera and military science fiction. An engaging and entertaining read, it provides clarity but never at the expense of consideration of complex issues and themes."--Helen Merrick, author of The Secret Feminist Cabal: A Cultural History of Science Fiction Feminisms