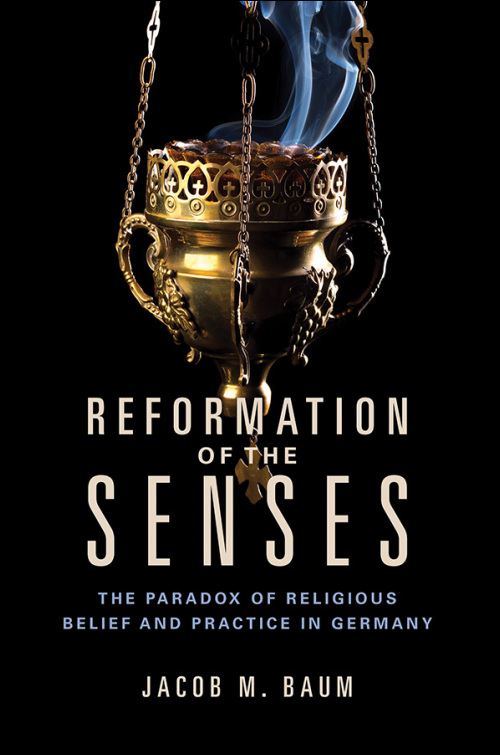 We see the Protestant Reformation as the dawn of an austere, intellectual Christianity that uprooted a ritualized religion steeped in stimulating the senses--and by extension the faith--of its flock. Historians continue to use the idea as a potent framing device in presenting not just the history of Christianity but the origins of European modernity.

Jacob M. Baum plumbs a wealth of primary source material from the fifteenth and sixteenth centuries to offer the first systematic study of the senses within the religious landscape of the German Reformation. Concentrating on urban Protestants, Baum details the engagement of Lutheran and Calvinist thought with traditional ritual practices. His surprising discovery: Reformation-era Germans echoed and even amplified medieval sensory practices. Yet Protestant intellectuals simultaneously cultivated the idea that the senses had no place in true religion. Exploring this paradox, Baum illuminates the sensory experience of religion and daily life at a crucial historical crossroads.

Provocative and rich in new research, Reformation of the Senses reevaluates one of modern Christianity's most enduring myths.

Jacob M. Baum is an assistant professor of history at Texas Tech University.

"Based on a broad array of sources, the author illuminates vital aspects of sensory culture—norms, ritual practices, beliefs, intellectual assumptions, and lived experiences. His conclusions offer a probing critique and correction of traditional theories about the nature and impact of the German Reformation."--Wietse de Boer, coeditor of Religion and the Senses in Early Modern Europe

"This is a pioneering history of the senses in the age of Reformations. Focusing on German Protestantism, Baum shows that changes in sensuous regimes were shaped by political and economic frameworks as well as modes of communication. Change was incomplete but pronounced, yet the myth of Protestantism as anti-sensual faith is comprehensively debunked. Based on a wide range of manuscripts and printed works from different localities, this is a significant contribution to our understanding of Reformation history which is at the cutting edge of the field."--Ulinka Rublack, author of The Astronomer and the Witch: Johannes Kepler's Fight for his Mother