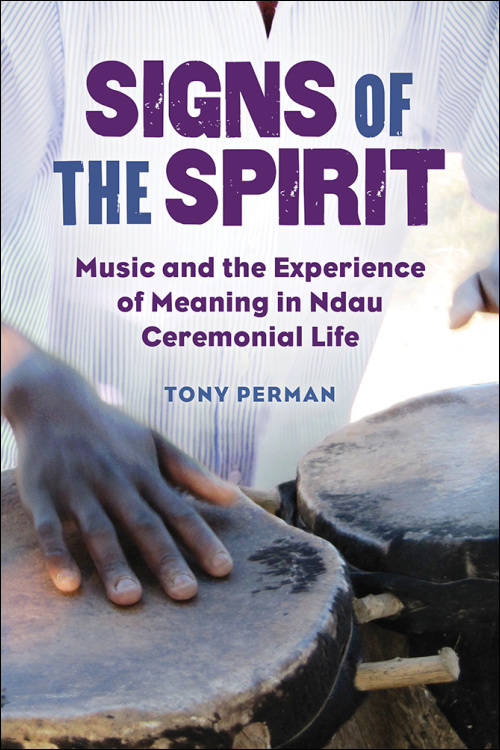 In 2005, Tony Perman attended a ceremony alongside the living and the dead. His visit to a Zimbabwe farm brought him into contact with the madhlozi, outsider spirits that Ndau people rely upon for guidance, protection, and their collective prosperity.

Perman's encounters with the spirits, the mediums who bring them back, and the accompanying rituals form the heart of his ethnographic account of how the Ndau experience ceremonial musicking. As Perman witnessed other ceremonies, he discovered that music and dancing shape the emotional lives of Ndau individuals by inviting them to experience life's milestones or cope with its misfortunes as a group. Signs of the Spirit explores the historical, spiritual, and social roots of ceremonial action and details how that action influences the Ndau's collective approach to their future. The result is a vivid ethnomusicological journey that delves into the immediacy of musical experience and the forces that transform ceremonial performance into emotions and community.

* Support for this publication was provided by the Dean’s Office at Grinnell College.

Tony Perman is an associate professor of music at Grinnell College.

"The real strength of the text lies in its reliance on the author's long-term fieldwork experiences and his nuanced and clearly communicated musical analysis to help elucidate the practices of a community whose experiences are worth recounting." --H-Net Reviews

"Refreshing . . . Along with the theory and history, peppered throughout the text are the author's descriptions of people, places, and events; these are beautiful, person-centered and humanizing, in a way I wish all ethnographic writing would strive for." --Journal of Folklore Research

"Perman's approach is an unambiguous recognition of the interpretive community's perspectives on an ethnography study's subject or text, which represents a clear adherence to a widely acknowledged good practice." --African Studies Quarterly

"Signs of the Spirit represents a thoughtful attempt to bring musical ethnography into dialogue with Peircean semiotics. . . . Signs of the Spirit demonstrates the applicability of semiotic theories to music scholarship, and their relevance to the study of perception, emotion, and meaning." --Ethnomusicology Forum

"A thoughtful application of Peircean semiotics to the musical rendering of spirit mediumship. With his ethnographic finesse and attentive listening, Tony Perman leads us through a spirit possession ceremony. We meet real people and real ancestral spirits in actual moments of feelingful performance. He shows us how relations with departed spirits vitalize social worlds that are made by hard work, imbued with violent history, ensnared in bleak politics, and animated by hope and artistry. A humanizing book about a densely social life world that encompasses the dead."--Louise Meintjes, author of Dust of the Zulu: Ngoma Aesthetics after Apartheid

"Tony Perman's highly original contribution to ethnomusicology and anthropology extends beyond his attention to the Ndau of the Chipinge region of southeastern Zimbabwe--largely ignored by nationalist policies as well in the scholarly literature. Based in a deep understanding of Ndau history, spirituality, musicking, and a profound analysis of a single spirit possession ceremony, Perman replaces standard cultural relativistic explanations of an alternative belief system with a portrayal of what is simply true and real for Ndau ceremonial participants. This alone marks an important theoretical advance. But perhaps of the greatest benefit for anyone in the arts, humanities, and social sciences, Signs of the Spirit provides the most thorough and coherent general theory of music and emotion to date. Perman's theory, in turn, is based on a highly specified explanation of the ways that musical performance and emotion are meaningful and, especially, the ways iconic and symbolic generality are transformed into an unqualified experience of the indexical here-and-now."--Thomas Turino, author of Music as Social Life: The Politics of Participation