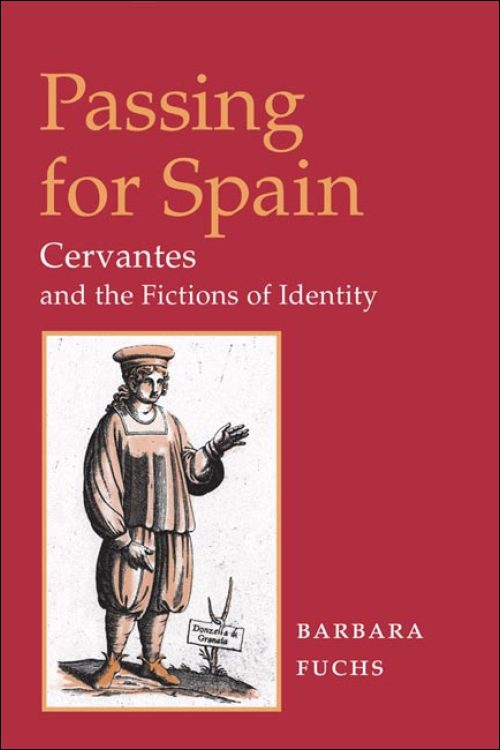 Passing for Spain charts the intersections of identity, nation, and literary representation in early modern Spain. Barbara Fuchs analyzes the trope of passing in Don Quijote and other works by Cervantes, linking the use of disguise to the broader historical and social context of Counter-Reformation Spain and the religious and political dynamics of the Mediterranean Basin.

In five lucid and engaging chapters, Fuchs examines what passes in Cervantes’s fiction: gender and race in Don Quijote and “Las dos doncellas”; religion in “El amante liberal” and La gran sultana; national identity in the Persiles and “La española inglesa.” She argues that Cervantes represents cross-cultural impersonation--or characters who pass for another gender, nationality, or religion--as challenges to the state’s attempts to assign identities and categories to proper Spanish subjects.

Fuchs demonstrates the larger implications of this challenge by bringing a wide range of literary and political texts to bear on Cervantes’s representations. Impeccably researched, Passing for Spain examines how the fluidity of individual identity in early modern Spain undermined a national identity based on exclusion and difference.

Barbara Fuchs is a professor of Spanish and English at the University of California, Los Angeles. Her books include The Poetics of Piracy: Emulating Spain in English Literature and Mimesis and Empire: The New World, Islam, and European Identities.

"Every page of Passing for Spain rewards the reader with penetrating readings powered by a vivid and supple critical idiom: a keen eye for generic motifs, rhetorical figures, classical and Renaissance intertextualities, the materiality of history; and vigorous engagement with current scholarship on genre, gender, and ethnicity in European (particularly Elizabethan) literature."--Renaissance Quarterly

“Passing for Spain is a healthy sign that Renaissance scholars are finally looking to early modern Spain as a likely locus for the study of self-fashioning and the formation of the nation- state.”--Anne J. Cruz