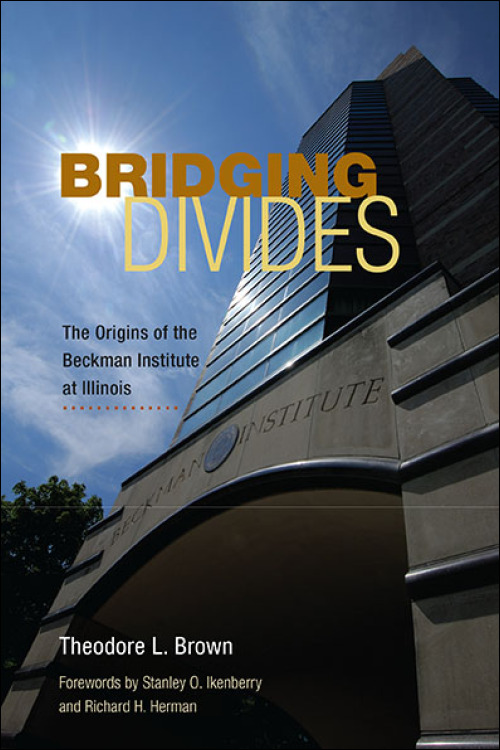 Bridging Divides offers a first-hand account of the origins of the Beckman Institute for Advanced Science and Technology, an interdisciplinary research institute at the University of Illinois at Urbana-Champaign devoted to leading-edge research in the physical sciences, computation, engineering, biology, behavior, cognition, and neuroscience.

The book follows the progress of the Beckman Institute's creation, from the initial conceptualization of a large, multi-disciplinary institute; through proposal formulation; to the architectural design and actual construction of its state-of-the-art building, made possible by the largest gift made to any public university at the time: a $40 million contribution from Illinois alumnus and founder of Beckman Instruments, Inc., Arnold O. Beckman and his wife Mabel M. Beckman.

Theodore L. Brown, the founding director of the Beckman Institute, brings an insider's personal perspective on its conception and its early operations. The evolution of a physical facility that matched a developing sense of what multidisciplinary and interdisciplinary research might be was a vital ingredient in the Institute's development. In addition, because the Institute represented a dramatic departure from traditional university organization, many challenges involving its administration and faculty had to be overcome.

A celebration of the Beckman Institute's first twenty years of operation since the building's completion in 1989, Bridging Divides provides an informative look back at the history of this groundbreaking interdisciplinary research center.

Theodore L. Brown is the founding director of the Beckman Institute and a professor emeritus of chemistry at the University of Illinois at Urbana-Champaign, where he also served as dean of the Graduate College, vice chancellor for research, and interim vice chancellor for academic affairs. He is the author of Making Truth: Metaphor in Science and Imperfect Oracle: The Epistemic and Moral Authority of Science and a coauthor of Chemistry: The Central Science.

"In many respects the Beckman Institute evolved from the scientific and technological strengths and culture of the Urbana-Champaign campus. In other ways, however, it changed the campus profoundly. Interdisciplinary collaboration and the capacity to attract exciting new faculty talent had long been a part of the Illinois tradition, but the Beckman Institute made a profound difference that endures today."--from the foreword by Stanley O. Ikenberry, Regent Professor and President Emeritus of the University of Illinois