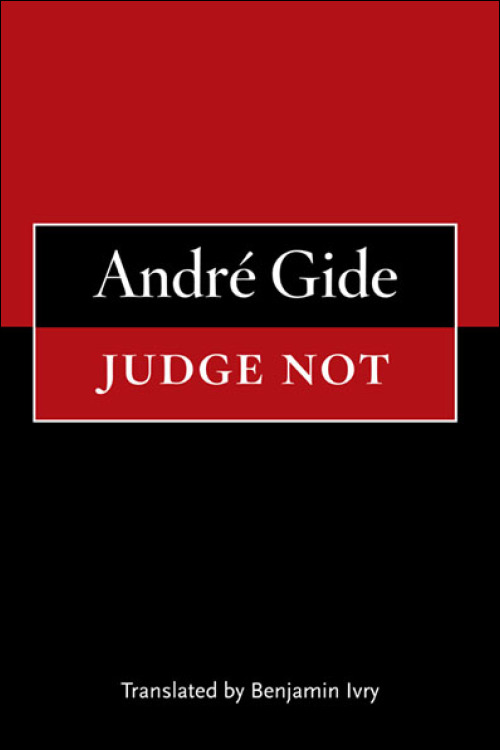 André Gide's lifelong fascination with the conventions of society led naturally to a strong interest in France's judicial system. At the age of sixty Gide published Judge Not, a collection of writings detailing his experiences with the law as well as his thoughts on truth, justice, and judgment. Gide writes about his experience as a juror in several trials, including that of an arsonist, and he analyzes two famous crimes of his day: the case of Marcel Redureau, a docile fifteen-year-old vineyard laborer who violently murdered his employer's family, and that of the respected Monnier family's confinement of their daughter, Blanche.

André Gide (1869–1951) is one of the giants of twentieth-century literature, honored for his plays, fiction, and criticism, as well as his extraordinary Journals. He won the Nobel Prize for literature in 1947. Benjamin Ivry's translations from the French include Vanished Splendors: The Memoirs of Balthus, Jules Verne's Magellania, Witold Gombrowicz's A Guide to Philosophy in Six Hours and Fifteen Minutes, and other books. He is the author of the poetry collection Paradise for the Portuguese Queen and the biographies Francis Poulenc, Arthur Rimbaud, and Maurice Ravel: A Life.

"Benjamin Ivry has translated and edited Gide's treatise on justice and depravity with admirable skill and exacting scholarship. Gide compiled this dossier of source material with unblinking honesty (or curiosity, as he called it) and subjected it to the moral acuity for which his fiction is famous."--Guy Davenport, author of Da Vinci's Bicycle: Ten Stories

"An indispensable item in the Gidean panoply, which Mr. Ivry has translated acutely and prefaced quite acrobatically. How clear it becomes, with each 'new' text of Gide's in English (but it was anything but clandestine in the French so many decades back) that a 'free mind' involves compelling responsibilities, here set forth with compulsive attention to principle and detail."--Richard Howard, translator of works by Gide, Camus, St.-Exupéry, Baudelaire, Cocteau, and others

"An excellent translation of this little-known, but wonderfully compelling work. One is struck, as always, by the keenness of Gide's mind: his lucid and meticulous reasoning, his omnivorous curiosity, his sensitive appreciation of the incomprehensible."--Jordan Stump, author of Naming and Unnaming: On Raymond Queneau