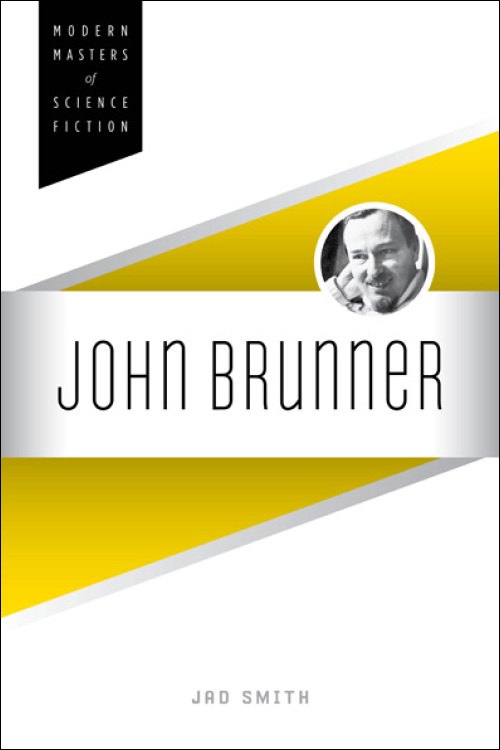 Under his own name and numerous pseudonyms, John Brunner (1934–1995) was one of the most prolific and influential science fiction authors of the late twentieth century. During his exemplary career, the British author wrote with a stamina matched by only a few other great science fiction writers and with a literary quality of even fewer, importing modernist techniques into his novels and stories and probing every major theme of his generation: robotics, racism, drugs, space exploration, technological warfare, and ecology.

In this first intensive review of Brunner's life and works, Jad Smith carefully demonstrates how Brunner's much-neglected early fiction laid the foundation for his classic Stand on Zanzibar and other major works such as The Jagged Orbit, The Sheep Look Up, and The Shockwave Rider. Making extensive use of Brunner's letters, columns, speeches, and interviews published in fanzines, Smith approaches Brunner in the context of markets and trends that affected many writers of the time, including Brunner's uneasy association with the "New Wave" of science fiction in the 1960s and '70s. This landmark study shows how Brunner's attempts to cross-fertilize the American pulp tradition with British scientific romance complicated the distinctions between genre and mainstream fiction and between hard and soft science fiction and helped carve out space for emerging modes such as cyberpunk, slipstream, and biopunk.

Jad Smith is an associate professor of English at Eastern Illinois University.

"Smith's biography shows how Brunner balanced craft and conscience in stories at once page turning and complex."--Shepherd Express

"It is to be hoped that this book succeeds in its aim of establishing John Brunner in his rightful place as one of the truly important modern writers of fantastic fiction."--Wormwood

"Smith paints a fascinating portrait of the rapidly changing world of Anglo-American SF of the 1950s through the 1980s, and of the significant role that Brunner played as a kind of bridge between SF traditions."--Locus Magazine

"I recommend this book to anyone who is an admirer of John Brunner or is a fan of science fiction history."--The Website at the End of the Universe

"Smith's exhaustively researched book puts Brunner's many novels into conversation with his public lectures, interviews, private letters, and political activism, as well as with longstanding fan debates about the essence of sf. The result casts new--and, at times, quite tragic--light on the complicated legacy of this important figure in the history of the genre. . . . Smith's study ably demonstrates the possibilities of biographically infused criticism of an author's entire career for sf scholars whose research practices--often because of publishing constraints--have tended to focus rather narrowly on small sets of texts."--Journal of the Fantastic in the Arts

"Jad Smith's study of Brunner's life and work is, in essence, a tragedy in which personal flaws amplified bad luck to undermine a literary career and obscure a reputation. . . . Smith's book clearly places Brunner in the context of the post-war literary and political landscapes and highlights his considerable achievements in terms of blending pulp and serious sf."--Foundation

"Reading at times like a suspenseful career overview, this engagingly written and insightful account of John Brunner's publishing struggles and literary aspirations will appeal to general science fiction readers as well as scholars in the field."--Gary K. Wolfe, author of Evaporating Genres: Essays on Fantastic Literature

"Based on extensive research and filled with thoughtful commentary and insights, Jad Smith's book will stand alone as the one essential resource on John Brunner, an important science fiction writer who merits much more attention than he has so far received."--Gary Westfahl, editor of Science Fiction Quotations: From the Inner Mind to the Outer Limits