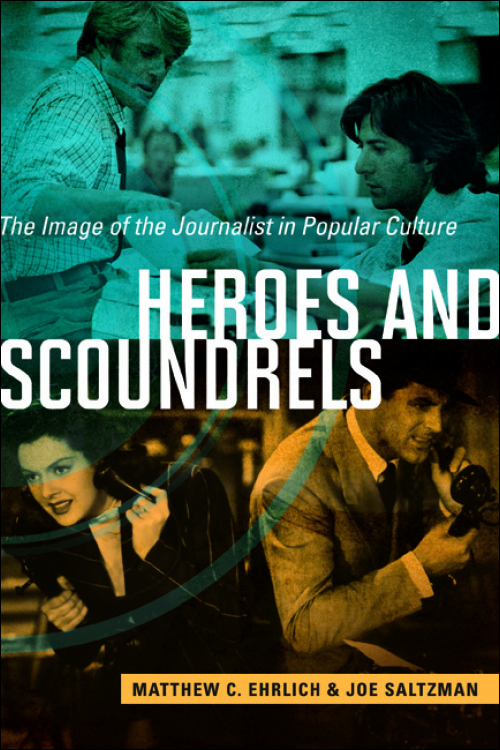 Whether it's the rule-defying lifer, the sharp-witted female newshound, or the irascible editor in chief, the journalists portrayed in popular culture have shaped our views of the press and its role in a free society since mass culture arose over a century ago.

Drawing on portrayals of journalists in television, film, radio, novels, comics, plays, and other media, Matthew C. Ehrlich and Joe Saltzman survey how popular media have depicted the profession across time. Their creative use of media artifacts provides thought-provoking forays into such fundamental issues as how pop culture mythologizes and demythologizes key events in journalism history and how it confronts issues of race, gender, and sexual orientation on the job.

From Network to The Wire, from Lois Lane to Mikael Blomkvist, Heroes and Scoundrels reveals how portrayals of journalism's relationship to history, professionalism, power, image, and war influence our thinking and the very practice of democracy.

Matthew C. Ehrlich is a professor of journalism at the University of Illinois at Urbana-Champaign. He is the author of Radio Utopia: Postwar Audio Documentary in the Public Interest and Journalism in the Movies. Joe Saltzman directs the Image of the Journalist in Popular Culture, a project of the Norman Lear Center at the Annenberg School for Communication and Journalism at the University of Southern California. He is a professor at USC Annenberg and author of Frank Capra and The Image of the Journalist in American Film.

"Authors Matthew C. Ehrlich and Joe Saltzman have done a painstakingly thorough job of marshaling, assembling, organizing, and setting down in print the vast amount of material that makes up our popular culture's representation of journalism and the men and women who commit it. . . . The subject matter holds plenty of interest for readers drawn to the popular media, and that's a lot of us; that's why it's called the popular media."--The Santa Fe New Mexican

"Authors Matthew Ehrlich and Joe Saltzman make a convincing case that fictional journalists are both ubiquitous and significant in pop culture-- in plays, movies, television, novels, short stories, comic strips, graphic novels, video games, and so on. . . . With scores of examples and an extensive appendix of media sources, Heroes and Scoundrels is a terrific resource for courses in mass communication and society, contemporary issues in journalism, journalism ethics, media history, and related courses."--Journalism and Mass Communication Quarterly

"Ultimately, anyone who studies media portrayals or public perceptions of journalists would benefit greatly from reading this book and incorporating it into their teaching and research."--Journalism and Mass Communication Educator

"A perceptive study of an enduring and tantalizing question: What do they think of us? Ehrlich and Saltzman craft a persuasive, sometimes painful, sometimes hilarious montage of the omnipresence of journalists in popular culture. But the book does more than that. The authors work also tells us a great deal about the powerful and defining role of popular culture itself. No one is safe from the roving eye of entertainment."--Richard Reeves, author of What the People Know: Freedom and the Press

"Stimulating and thought-provoking. . . . No other work comes close to covering the subject as broadly."--Maurine H. Beasley, author of Women of the Washington Press: Politics, Prejudice, and Persistence

"The assumption behind Heroes and Scoundrels: The Image of the Journalist in Popular Culture is that the audience's perception of the messenger shapes the message. That's hardly a new idea but, applied to journalism in a democracy, it's vastly significant. For example, it turns out that, while the media have been transformed by technology, archetypal images of journalists have persisted. Maybe everything hasn't changed all that much after all. That, along with other important insights gained from formidable research, will help both journalists and their audiences better understand the news of the future. Besides, it’s fun to read all those stories."--Warren Olney, Host and Executive Producer, "To the Point" and "Which Way, LA?", KCRW-FM

"A great read that showcases depictions of journalists over the past century in popular culture. Its thoughtful analysis integrates cultural theory with media concepts and provides important historical context that will interest professionals and academics alike."--Bonnie Brennen, author of Qualitative Research Methods for Media Studies

"Using a multidisciplinary approach that draws on everything from language studies to cultural studies, Matthew C. Ehrlich and Joe Saltzman creatively and entertainingly address the history of the journalist’s image, 1890 to the present. Fascinating chapters focus on the images of photographers, war correspondents, gay and lesbian journalists, journalists of color, women journalists, and journalists of the sci fi future. The dueling myths of the journalist as hero and scoundrel, the book persuasively argues, raise questions about the enduring tension in society between the press as a force for freedom and a tool of oppression."--Loren Ghiglione, author of CBS's Don Hollenbeck: An Honest Reporter in the Age of McCarthyism