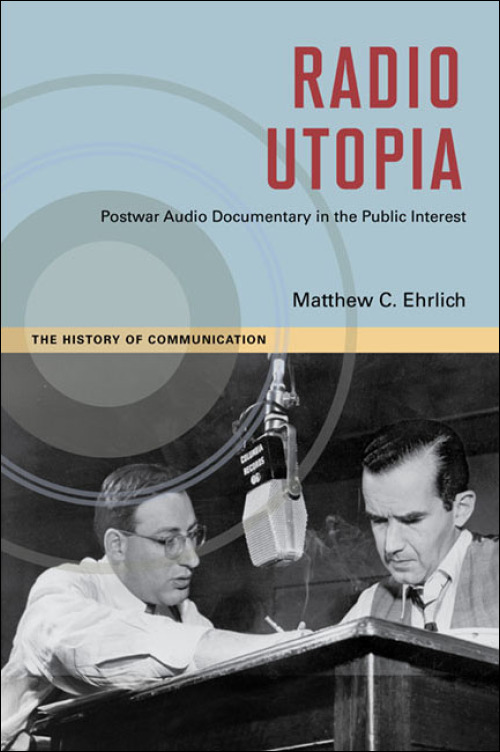 As World War II drew to a close and radio news was popularized through overseas broadcasting, journalists and dramatists began to build upon the unprecedented success of war reporting on the radio by creating audio documentaries. Focusing particularly on the work of radio luminaries such as Edward R. Murrow, Fred Friendly, Norman Corwin, and Erik Barnouw, Radio Utopia: Postwar Audio Documentary in the Public Interest traces this crucial phase in American radio history, significant not only for its timing immediately before television, but also because it bridges the gap between the end of the World Wars and the beginning of the Cold War.

Matthew C. Ehrlich closely examines the production of audio documentaries disseminated by major American commercial broadcast networks CBS, NBC, and ABC from 1945 to 1951. Audio documentary programs educated Americans about juvenile delinquency, slums, race relations, venereal disease, atomic energy, arms control, and other issues of public interest, but they typically stopped short of calling for radical change. Drawing on rare recordings and scripts, Ehrlich traces a crucial phase in the evolution of news documentary, as docudramas featuring actors were supplanted by reality-based programs that took advantage of new recording technology. Paralleling that shift from drama to realism was a shift in liberal thought from dreams of world peace to uneasy adjustments to a cold war mentality.

Influenced by corporate competition and government regulations, radio programming reflected shifts in a range of political thought that included pacifism, liberalism, and McCarthyism. In showing how programming highlighted contradictions within journalism and documentary, Radio Utopia reveals radio's response to the political, economic, and cultural upheaval of the post-war era.

Matthew C. Ehrlich is a professor of journalism at the University of Illinois at Urbana-Champaign. He is the coauthor of Heroes and Scoundrels: The Image of the Journalist in Popular Cultureand the author of Journalism in the Movies.

"With careful attention to detail, a command of archival sources including recordings of old radio programs, and an understanding of how the radio industry operated, Ehrlich has produced an entertaining book with a convincing argument. It is that rarest of things—a monograph with a well-defined subject that has both scholarly integrity and an appeal to a wide audience."--American Historical Review

"An excellent contribution to the now-burgeoning field of revisionist radio scholarship."--Technology and Culture

"A vivid reflection of the social and cultural climate of the post-World War II era, Matthew C. Ehrlich's engaging study shows readers what was occurring on the national radio networks as the Cold War started and the impact that the war had on broadcasting and those who worked in it. This study is of significance to historians, mass communications scholars, and journalists."--Patrick S. Washburn, author of The African American Newspaper: Voice of Freedom

"A fascinating book that brings together important moments in journalism, technology, politics, world order, media control, and the mood in the United States during the postwar years. Ehrlich dramatically sharpens our understanding of how both radio and television news evolved during the late 1940s."--Mike Conway, author of The Origins of Television News in America: The Visualizers of CBS in the 1940s

Received the Tankard Book Award from the Association for Education in Journalism and Mass Communication (AEJMC), 2012.

Get more information about the book, including links to audio features.Radio Utopia wins Tankard Book Award