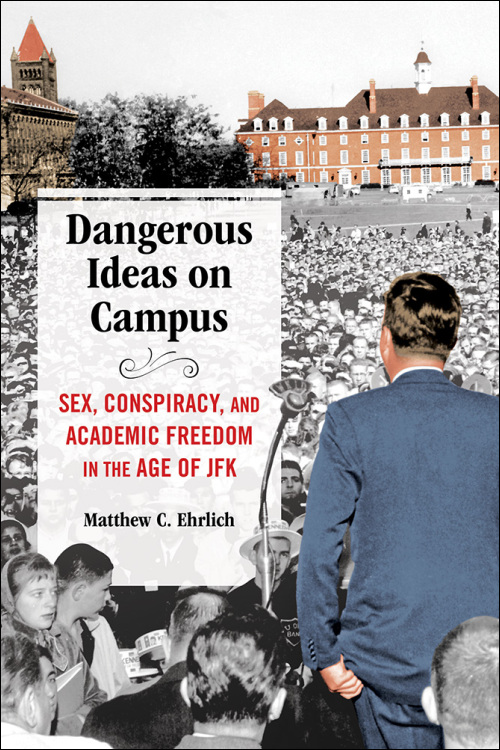 In 1960, University of Illinois professor Leo Koch wrote a public letter condoning premarital sex. He was fired. Four years later, a professor named Revilo Oliver made white supremacist remarks and claimed there was a massive communist conspiracy. He kept his job.

Matthew C. Ehrlich revisits the Koch and Oliver cases to look at free speech, the legacy of the 1960s, and debates over sex and politics on campus. The different treatment of the two men marked a fundamental shift in the understanding of academic freedom. Their cases also embodied the stark divide over beliefs and values--a divide that remains today. Ehrlich delves into the issues behind these academic controversies and places the events in the context of a time rarely associated with dissent, but in fact a harbinger of the social and political upheavals to come.

An enlightening and entertaining history, Dangerous Ideas on Campus illuminates how the university became a battleground for debating America's hot-button issues.

Watch a presentation by Matthew C. Ehrlich to the Champaign County History Museum

* Publication supported by a grant from the Winton U. Solberg US History Subvention Fund

Matthew C. Ehrlich is a professor emeritus of journalism at the University of Illinois Urbana-Champaign. His books include Kansas City vs. Oakland: The Bitter Sports Rivalry That Defined an Era and Radio Utopia: Postwar Audio Documentary in the Public Interest, winner of the James W. Tankard Book Award.

"Ehrlich has thoroughly researched and carefully presented two obscure but influential U of I episodes that had widespread effects in their own time and concern issues of free speech and its restriction still relevant to ours. It is a book well worth reading for fans of the U of I, for those who personally remember the 60s, and for anyone concerned about academic freedom." --Illinois Times

"A rich account of the dynamics of academic freedom at [the University of Illinois] in the 1960s. . . . A timely book." --Choice

"Matthew Ehrlich takes what might have been local events and uses serious research to illuminate and elevate them to national and historical significance. His thoughtful weaving of threads such as academic freedom, university governance, student life, and sexual mores becomes a lively story and analysis of higher education that builds suspense, then provides answers. One of the best accounts of campus life and problems in the early 1960s I have read."--John R. Thelin, author of Going to College in the Sixties

"A captivating and thoroughly researched story of a single American university at a propitious juncture. Ehrlich's engaging writing propels the arguments, the contemporary relevance of which is both obvious from the narrative and well summarized in a final chapter. I am already chomping at the bit for the opportunity to share this exciting work with others."--Henry Reichman, author of The Future of Academic Freedom