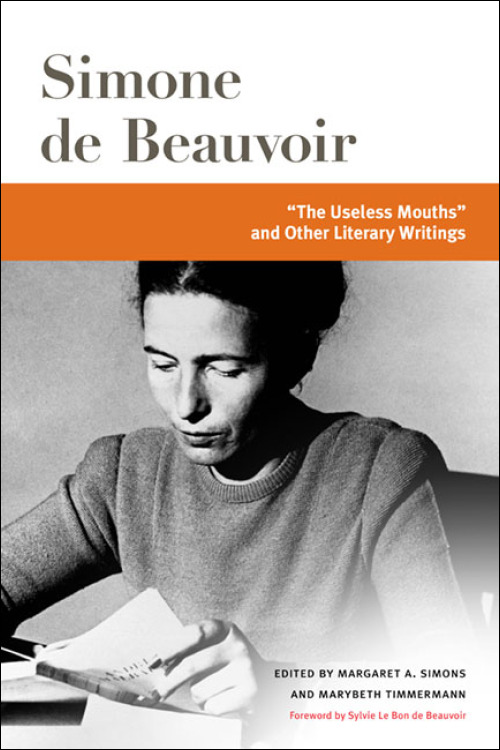 The volume begins with a new translation of the 1945 play The Useless Mouths, written in Paris during the Nazi occupation. Other pieces were discovered after Beauvoir's death in 1986, such as the 1965 short novel "Misunderstanding in Moscow," involving an elderly French couple who confront their fears of aging. Two additional previously unknown texts include the fragmentary "Notes for a Novel," which contains the seed of what she later would call "the problem of the Other," and a lecture on postwar French theater titled Existentialist Theater. The collection notably includes the eagerly awaited translation of Beauvoir's contribution to a 1965 debate among Jean-Paul Sartre and other French writers and intellectuals, "What Can Literature Do?"

Prefaces to well-known works such as Bluebeard and Other Fairy Tales, La Bâtarde, and James Joyce in Paris: His Final Years are also available in English for the first time, alongside essays and other short articles. A landmark contribution to Beauvoir studies and French literary studies, the volume includes informative and engaging introductory essays by prominent and rising scholars.

Simone de Beauvoir (1908–86) was a French existentialist philosopher. Her works include Ethics of Ambiguity (1947) and The Second Sex (1949). Margaret A. Simons is Distinguished Research Professor Emerita at Southern Illinois University Edwardsville and the author of Beauvoir and The Second Sex: Feminism, Race, and the Origins of Existentialism. Sylvie Le Bon de Beauvoir, adopted daughter and literary executor of Simone de Beauvoir, is the editor of Lettres à Sartre and many other works by Beauvoir. Marybeth Timmermann is a contributing translator and editor of Beauvoir's Philosophical Writings.

"An impressive team of experts introduces the book's ten pieces and thoroughly annotates them. . . . This book nicely puts the philosopher's work into an expanded context for nonspecialists."--Publishers Weekly (starred review)

"This engaging volume ... is the result of painstaking research and meticulous translation by a team of international scholars. . . . Essential."--Choice

"English-speaking readers can now hear the subleties of a Beauvoir clearly engaged in the pursuit of defining the purpose and value of literature in her time."--H-France Review

"This collection of previously untranslated pieces by Simone de Beauvoir makes available for the first time in English a variety of literary writings that are also of philosophical interest. As with previous volumes in the Beauvoir Series, "The Useless Mouths" and Other Literary Writings breaks new ground, and it will become indispensible to Beauvoir scholars."--Claudia Card, author of Confronting Evils: Terrorism, Torture, Genocide

"This collection of Beauvoir's literary works not only presents us with further evidence of the importance of Beauvoir's existentialist literary style but also gives new insight into her thinking about aesthetics, existentialism, intersubjectivity, aging, and her relationship with Sartre. In addition, here we see some of her most incisive engagements with her critics and critics of existentialism more generally."--Kelly Oliver, author of Animal Lessons: How They Teach Us to Be Human