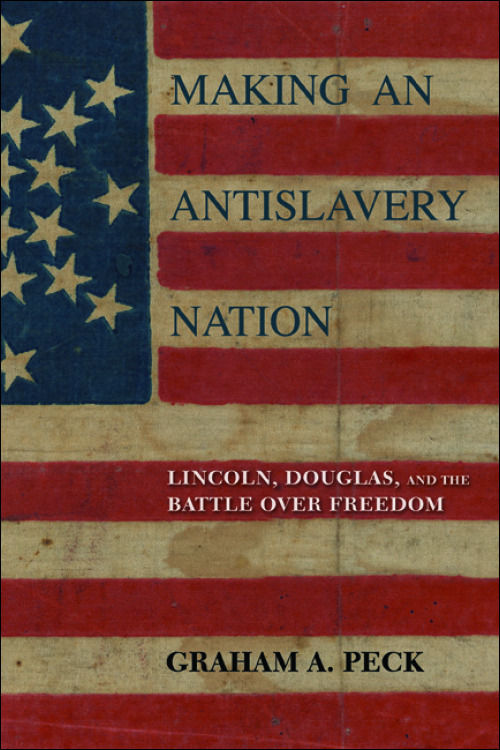 This sweeping narrative presents an original and compelling explanation for the triumph of the antislavery movement in the United States prior to the Civil War. Abraham Lincoln's election as the first antislavery president was hardly preordained. From the country's inception, Americans had struggled to define slavery's relationship to freedom. Most Northerners supported abolition in the North but condoned slavery in the South, while most Southerners denounced abolition and asserted slavery's compatibility with whites' freedom. On this massive political fault line hinged the fate of the nation.

Graham A. Peck meticulously traces the conflict over slavery in Illinois from the Northwest Ordinance in 1787 to Lincoln's defeat of his archrival Stephen A. Douglas in the 1860 election. Douglas's attempt in 1854 to persuade Northerners that slavery and freedom had equal national standing stirred a political earthquake that brought Lincoln to the White House. Yet Lincoln's framing of the antislavery movement as a conservative return to the country's founding principles masked what was in fact a radical and unprecedented antislavery nationalism. It justified slavery's destruction but triggered the Civil War.

Presenting pathbreaking interpretations of Lincoln, Douglas, and the Civil War's origins, Making an Antislavery Nation shows how battles over slavery paved the way for freedom's triumph in America.

Graham A. Peck is the Wepner Distinguished Professor of Lincoln Studies in the Department of History at the University of Illinois at Springfield. He is the writer, director, and producer of the award-winning documentary Stephen A. Douglas and the Fate of American Democracy. His film, podcasts, and publications are available at civilwarprof.com

"Sure to interest anyone looking for a fine-grained account of pre-Civil War politics."--Publisher's Weekly

"Peck has provided a useful and interesting framework for understanding antislavery politics in Illinois and in the nation."--The Annals of Iowa

"Making an Antislavery Nation elucidates overlooked or underemphasized dimensions of the shifting set of beliefs about freedom and slavery that cohered into Lincoln's ideological vision of an anti-slavery nation."--Reviews in History

"[A] thoughtful and valuable new contribution to the unending debate about the coming of the Civil War."-- Civil War Book Review

"Peck has written a book that demands attention." --The Journal of the Civil War Era

"Graham A. Peck offers a new perspective for why antislavery politics arose before the Civil War. . . . It is a pleasure to read something so new on this topic." --The Historian

"An ambitious and well-written volume." --Journal of the Early Republic

"Making an Antislavery Nation illuminates much about the conflicting world of antebellum Illinois politics. . . .Peck's careful scholarship offers important insights about the antebellum North as a whole and . . . helps us better comprehend how the antislavery Republican Party successfully sold its message to an overwhelmingly moderate constituency." --The American Historical Review

"Making an Antislavery Nation is an elegant and important reinterpretation of the political battles between slavery and freedom from the nation’s founding to the secession crisis. In focusing on Illinois, Graham Peck brilliantly highlights the significance of the state in national politics and of Stephen Douglas as the pivotal figure in the rise of antislavery politics and disunion. His portrait of Douglas is unequaled in a story that is structurally and stylistically a work of immense sophistication."--John Stauffer, Harvard University, and author of Giants: The Parallel Lives of Frederick Douglass and Abraham Lincoln

"Graham Peck offers a sophisticated analysis of the forces that led to the Civil War, emphasizing how Abraham Lincoln disguised the wolf of radical antislavery nationalism with conservative sheep’s clothing, and how Stephen A. Douglas was gradually crushed between the upper millstone of Southern intransigence and the nether millstone of Northern disaffection for his toleration of slavery."--Michael Burlingame, author of Abraham Lincoln: A Life

"The victory of Abraham Lincoln and the Republican Party was the most significant political revolution in American history. Graham A. Peck’s penetrating account of the politics of slavery in Illinois—at once a key battleground state and a microcosm of the nation as a whole—offers a powerful new interpretation of this critical moment in antebellum politics. By fusing antislavery radicalism with American nationalism, Lincoln and the Republicans overcame an increasingly proslavery northern Democratic Party. Thoroughly researched and judiciously argued, Making an Antislavery Nation changes the way we understand the triumph of the Republicans and the origins of the Civil War."--Matthew Karp, Princeton University, and author of This Vast Southern Empire: Slaveholders at the Helm of American Foreign Policy

"Superb…Substantive and compelling argument…in marvelously clear and lucid prose."--Daniel Feller, Director of the Papers of Andrew Jackson, University of Tennessee