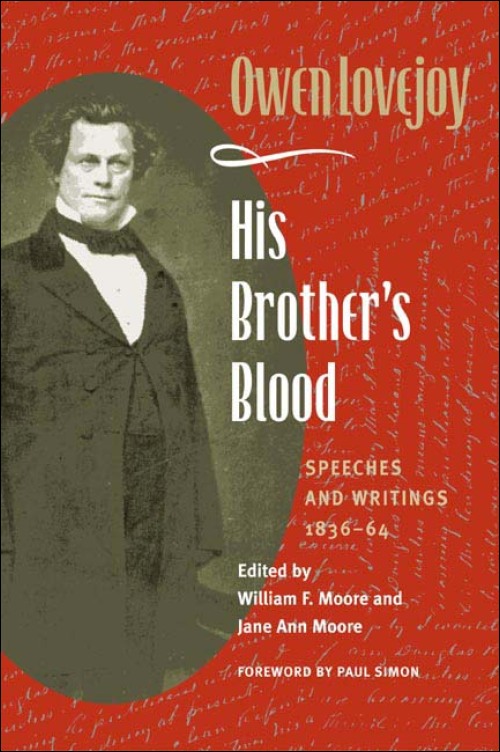 This is the first comprehensive collection of the speeches of Owen Lovejoy (1811-64). After the assassination of his brother, Elijah, for printing an antislavery newspaper, instead of seeking revenge on the murderers, Lovejoy chose to help eradicate the system of racial slavery.Including sermons, campaign speeches, open letters, and his congressional exchanges and addresses, His Brother's Blood offers a colorful and important perspective on the turmoil leading up to the Civil War and the excitement in Congress that produced universal emancipation.

William F. Moore and Jane Ann Moore are ordained ministers in the United Church of Christ and codirectors of the Lovejoy Society. Paul Simon, retired U.S. senator from Illinois, teaches and directs the Public Policy Institute at Southern Illinois University at Carbondale. He is the author of Freedom’s Champion: Elijah Lovejoy.

"His Brother's Blood is an extraordinary accomplishment. . . . Scholars of the Lincoln era owe a debt of gratittude to William and Jane Ann Moore, ordained ministers in teh United Church of Christ and codirectors of the Lovejoy Society, for making Lovejoy's writings so readily accessible."--Lincoln Lore

"In what was obviously a labor of love, the editors spent many years gathering these documents from widely scattered archives and obscure publications. They have edited them with great care and accompanied them with informative introductions and ample notes."--Journal of Illinois History

"The editors are to be commended for making the work of this important antislavery activist more accessible. Few people would expect a long book of nineteenth-century speeches to be a good read, but I found myself thoroughly enjoying Lovejoy's speeches. I heartily recommend His Brother's Blood to scholars interested in the antislavery movement and northen politics during the Civil War era."--Journal of Southern History

"The collection, enriched by ample footnotes, offers valuable insights into the political antislavery movement, and the editors are to be commended for bringing these documents together."--Civil War History

"The editors did an admirable job compiling these documents, providing readers an opportunity to delve into Lovejoy's views on slavery, religion and politics firsthand."--Sandra Frink, Assistant Professor of History at Roosevelt University in Chicago

"The speeches gathered in this important collection reveal the eloquence and wide-ranging interests of this significant and fascinating antislavery leader and member of Congress. A friend of Abraham Lincoln, Lovejoy gently prodded the president to move more quickly toward abolition during the Civil War. Accessible and readable, Lovejoy's speeches afford us a rare look at the intersection of religion and politics. They also reveal a breadth of learning rarely matched in his time or ours."--Fred J. Blue, biographer of Salmon P. Chase and Charles Sumner