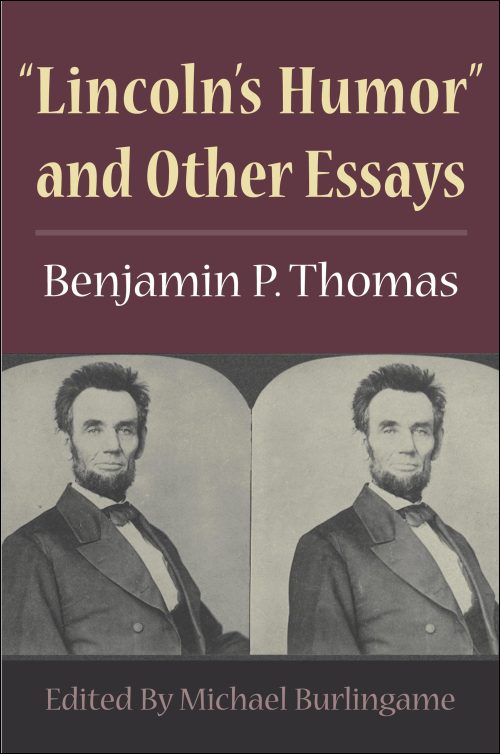 This volume gathers the best previously unpublished and uncollected writings on Abraham Lincoln and Lincoln scholarship by one of his great biographers, Benjamin P. Thomas.

A skilled historian and a masterful storyteller himself, Thomas was widely regarded as the greatest Lincoln historian of his generation. With these essays, he combines historical depth with narrative grace in delineating Lincoln's qualities as a humorist, lawyer, and politician. From colorful tall tales to clever barbs aimed at political opponents, Lincoln clothed a shrewd wit in a homespun, backwoods vernacular. He used humor to defuse tension, illuminate a point, put others at ease--and sometimes for sheer fun. From an early reliance on broad humor and ridicule in speeches and on the stump, Lincoln's style shifted in 1854 to a more serious vein in which humor came primarily to elucidate an argument. "If I did not laugh occasionally I should die," he is said to have told his cabinet, "and you need this medicine as much as I do."Thomas brings his deep knowledge of Lincoln to essays on the great man's tumultuous career in Congress, his work as a lawyer, his experiences in the Courts, and his opinions of the South. A gracious survey of Lincoln's early biographers, particularly Ida Tarbell, stands alongside an appreciation of Harry Edward Pratt, a key figure in the early days of the Abraham Lincoln Association. Thomas also assesses Lincoln's use of language and the ongoing significance of the Gettysburg Address.

This diverse collection is enhanced by an introduction by Michael Burlingame, himself a leading biographer of Lincoln. Burlingame provides a balanced portrait of Thomas and his circuitous path toward writing history.

"Here you'll get tall tales and clever barbs Lincoln shot at political opponents. You'll see how he used humor to defuse tension, illuminate a point, and put others at ease. And, you'll see him from the eyes of political friends and foes."--Janeen Burkholder, Illinois Times

"Admirers of the gifted and graceful Lincoln author Benjamin P. Thomas now can enjoy the best of his short essays in this welcome volume."--Cullom Davis, Lincoln Legal Papers

"Thomas left a corpus of books and articles that firmly established his reputation as a careful researcher, gifted interpreter, and lucid stylist. . . . No one in the past ten years of Lincoln scholarship has come close to matching Michael Burlingame's productivity or his mastery of Lincoln sources."--Douglas L. Wilson, author of Honor's Voice: The Transformation of Abraham Lincoln.