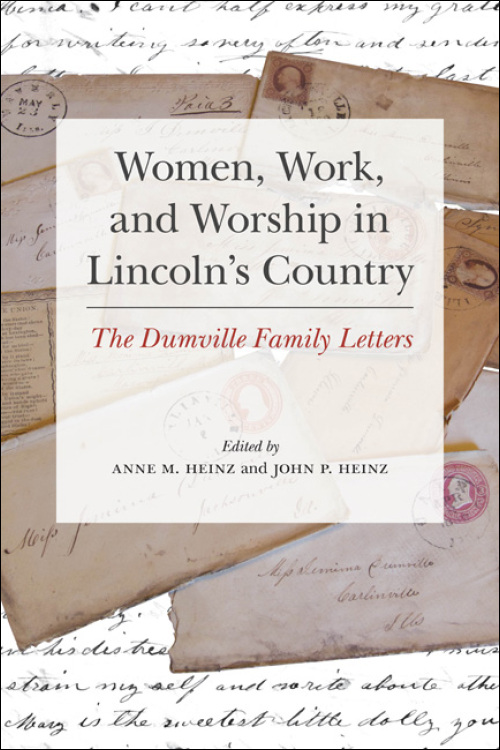 The Dumville family settled in the Midwest during an era beset by political passions and dramatic social change. Arguments over slavery raged. Railroads and circuit-riding preachers brought the wider world to the prairie. Irish and German immigrants flooded towns and churches.

Anne M. Heinz and John P. Heinz draw from an extraordinary archive at the Abraham Lincoln Presidential Library and Museum to reveal how Ann Dumville and her daughters Jemima, Hephzibah, and Elizabeth lived these times. The letters tell the story of Ann, expelled from her Methodist church for her unshakable abolitionist beliefs; the serious and religious Jemima, a schoolteacher who started each school day with prayer; Elizabeth, enduring hard work as a farmer's wife, far away from the others; and Hephzibah, observing human folly and her own marriage prospects with the same wicked wit. Though separated by circumstances, the Dumvilles deeply engaged one another with their differing views on Methodism, politics, education, technological innovation, and relationships with employers. At the same time, the letters offer a rarely seen look at antebellum working women confronting privation, scarce opportunities, and the horrors of civil war with unwavering courage and faith.

Anne M. Heinz is the former Assistant Dean of the Division of the Social Sciences at the University of Chicago and the coauthor of Crime and City Politics. John P. Heinz is the former Director of the American Bar Foundation and Owen L. Coon Professor Emeritus at the Northwestern University School of Law. He is the coauthor of Urban Lawyers: The New Social Structure of the Bar.

"Anne M. Heinz and John P. Heinz show the impact and importance of family letters. . . . This work introduces the reader to the world of everyday people hanging onto their faith to see them through a tough time in American history."--Journal of Illinois History

"A remarkable story of the everyday lives and extraordinary events of mid-nineteenth century America. The editors have made a strong case for the vibrancy and historical significance of women's personal writings. . . . Like intellectual fingerprints on the ledger of history, each letter reveals the distinctiveness of each woman's view of herself and the world around her. Thanks to the solid editorial work by the Heinzs, the voices of commoners, of lower-class people, of women in the American heartland struggling to control their destinies, are now heard and cherished."--Civil War Book Review

"A wonderful achievement consisting of a trove of letters from a family living plain lives in central Illinois in the middle of the nineteenth century. Plain lives? Very many deaths from cholera and measles and other means, family strains, feuds, the moral rigor of the Methodist Church, and then the war came. People wear out. There's material here for a dozen novels: 'Mr. Pitner was turned out of the church in March, for selling men and women into perpetual bondage, as the people said. He takes it very hard, he says he has had a great deal of trouble, and we know he has for his sister was burned to death, and his two sons was drowned just at the time they began to be of some service to him but he says that this afaire hurts him worse than all the others, as he knows he is innocent of the charges brought against him. . .'"--Ward Just

"A very useful discussion of women's place in rural Midwestern communities; the impact of the Civil War on family life; and the texture of life in these small, central Illinois towns. I don't know of any other collection quite like it."--Pamela Riney-Kehrberg, author of Always Plenty to Do: Growing Up on a Farm in the Long Ago

"The editors have a good understanding of everyday life in the rural Midwest in the mid-nineteenth century. The conclusions they draw are based solidly on the evidence provided by the letters and are informed by scholarship in the field."--Marilyn F. Motz, coeditor of Making the American Home: Middle-Class Women and Domestic Material Culture, 1840–1940